The DC Department of Corrections will immediately begin housing inmates based on their “gender identity,” instead of their biological sex, as part of a lawsuit settlement.

The lawsuit was filed by Sunday Hinton, a transgender biological male who had been housed with men, on behalf of themselves and “others similarly situated.”

According to the settlement agreement, which was signed on Wednesday, the D.O.C. also agreed to make individualized decisions about whether or not transgender people should be placed in protective custody and will stop the practice of shackling them when they are moved throughout the jail.

Additionally, the D.O.C. will be submitting regular reports to the Public Defender Service for DC, which helped represent Hinton along with the American Civil Liberties Union (ACLU).

“Hinton says she was forced to live in a men’s unit for more than two weeks of her four-week stay at the D.C. Jail last spring. According to her lawyers, Hinton was being held at the jail pretrial for a charge that has since been dismissed: unarmed burglary with the intent to steal $20. After she filed a lawsuit, she was eventually moved to a women’s unit on the Correctional Treatment Facility side of the D.C. Jail complex,” the DCist reports. “At the time, a DOC spokesperson refuted the account of Hinton and her lawyers, arguing instead that Hinton had been placed into single-occupancy quarantine for the two weeks after her arrival to the jail as part of the facility’s COVID-19 protocols.”

Hours before the first hearing in the lawsuit, Hinton was moved to a women’s unit, according to the report.

Under the DC D.O.C.’s previous policy, transgender inmates were assigned to units corresponding with their biology until a determination on their placement was made by the Transgender Housing Committee.

This meant that until the committee met, the inmates were placed in protective custody and shackled when moved throughout the prison.

“They would be shackled at the hands, the feet and with a chain connecting them. One of our declarants described it as being chained up like an animal — totally unnecessary. Degrading and humiliating,” Scott Michelman, legal director of the ACLU-DC, told NBC Washington.

In November, the state of California was sued by the feminist organization Women’s Liberation Front for moving transgender inmates into women’s prisons.

The organization argued that the policy violated the First, Eighth, and 14th amendments of female prisoners.

“Hundreds of men have applied for transfers to women’s prisons, and dozens have already been transferred. These transfers have resulted in intimidation, sexual harassment, physical assaults, and sexual assaults committed by the men against female inmates. This policy has also prevented women whose religions require sex separation from practicing their faith. Moreover, sharing intimate space with male offenders has exacerbated women’s symptoms of depression, anxiety, and PTSD; diminished their quality of life due to increased security measures for male offenders; and reduced their access to appropriate trauma-informed care and rehabilitative programs,” the Women’s Liberation Front‘s website reads.

“This law has caused pervasive, foreseeable, and well-documented physical and psychological damage to incarcerated women,” they claim. 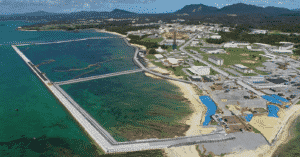