Just moments after the incident occurred, fellow comedian Chris Rock joined Chappelle on stage and said, "Was that Will Smith?'

Videos shared on social media show the moment Dave Chappelle was attacked Tuesday night when a person ran onto the stage during his performance at the Hollywood Bowl.

The Los Angeles Police Department (LAPD) told ABC7 that officers had responded to an incident at the Hollywood Bowl around 10:45 p.m. They found a man reportedly armed with a gun and a knife when they arrived. He was taken into custody.

The incident occurred while Chappelle was near the end of his stand-up show titled “Netflix Is a Joke Presents: Dave Chappelle and Friends.”

The videos from social media show a man rushing the stage and diving toward Chappelle while he is holding a microphone.

According to ABC, Chappelle and the man scuffled on the stage floor before the man ran backstage. Security staff then surrounded the man in the rear corner of the stage. Chappelle seemed to move toward the backstage altercation, saying the man was being “stomped.” Chappelle repeatedly asked for security to remove the man from the stage.

It did not appear that Chappelle was injured, and the video shows that he continued his show after the incident occurred.

Video from social media appeared to show the man’s arm was injured after his tussle with security backstage, as he was being loaded into an ambulance.

Within moments of the incident, comedian Chris Rock, who performed earlier in the night, joined Chappelle on stage and joked: “Was that Will Smith?”

“It was a trans man,” Chappelle joked onstage after being attacked.

There has been no confirmation regarding what prompted the incident on Tuesday.

Chappelle faced backlash last year over comments he made regarding the transgender community in his latest Netflix special entitled “The Closer.” The special sparked social media criticism and protests at Netflix’s Los Angeles headquarters. 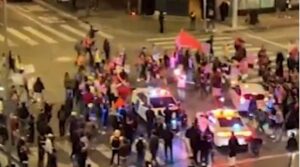