U.S. Customs and Border Protection (CBP) officers at the Laredo Port of Entry captured a 61-year-old Mexican citizen wanted in Dallas for sexually assaulting a child.

Alfredo Soto Martinez, a Mexican citizen and lawful permanent U.S. resident, had been on the run when he was apprehended by CBP at the Juarez Lincoln International Bridge.

“CBP Field Operations is always ready to assist our law enforcement partners in locating those wanted persons with outstanding warrants, especially those allegedly involved in heinous crimes of a sexual nature with children,” said Port Director Alberto Flores in a statement.

A CBP officer was processing bus traffic coming in from Mexico last week when he pulled Martinez for a secondary inspection.

“After escorting the passenger to secondary, subsequent biometric verification through law enforcement databases confirmed that the man had an outstanding felony warrant for sexual assault of a child, out of the Dallas County Sheriff’s Office, in Dallas, Texas. The warrant was confirmed to be active. The man was turned over to the Webb County Sheriff’s Office to await criminal proceedings,” CBP said in a press release.

The fugitive was discovered using the National Crime Information Center (NCIC), a database law enforcement agencies use to share information including outstanding warrants for serious offenses.

Last month, CBP officers at the El Centro Sector arrested an undocumented registered sex offender with a previous felony conviction for child molestation out of Gwinnett County, Atlanta, Georgia. He had previously been deported. The agency reported at the time that in the fiscal year 2021, which began on October 1, 2020, El Centro Sector Border Patrol agents arrested and/or removed 38 individuals either convicted or wanted on sexual offense charges.

As of August, U.S. Customs and Border Patrol agents had made 8,691 arrests at the southern border of known criminals who have entered the U.S. illegally. Combined, they have committed 12,685 crimes in the U.S., according to a report from Wisconsin Right Now. 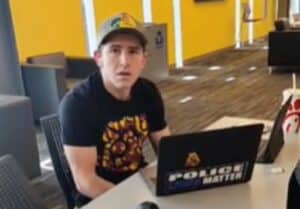