Albany County District Attorney’s Office and New York State Board of Elections are reportedly seeking a criminal investigation into Zeldin over thousands of alleged duplicate signatures regarding his removal from the Independence Party ballot in July.

Out of the 45,000 signatures required for Zeldin to secure his name on the Independence Party ballot, only 39,228 were validated. About 13,000 signatures were disqualified because of invalid voter registration, duplicate signatures, or incorrect addresses provided, according to Fox News Digital.

Katie Vincentz, a spokeswoman for Zeldin’s campaign, claimed that current Democratic New York Governor Kathy Hochul was desperate for a distraction over rising crime in the state saying she “earned quite an infamous reputation in New York as the undisputed queen of scandal, abuse, and pay to play corruption.”

“As a congressman, Lee Zeldin supported legal efforts to overturn the 2020 election and pushed baseless conspiracy theories under the banner of ‘election integrity,’ but apparently that doesn’t apply to his own campaign,” said Hochul’s campaign manager Brian Lenzmeier in a Sunday statement. “His campaign is now implicated in a criminal investigation for attempting to defraud voters and Zeldin needs to be held accountable.”

On Monday Hochul said she needed more time before she commits to debating Zeldin prior to the November general election, the New York Post reported.

“That’ll be all clarified by the end of this week,” said Hochul in Manhattan during a press conference. “We’ll have our full schedule of debate, forums, events we’re gonna be doing so that will be out very shortly. I know there’s a lot of interest.”

Last July, Zeldin, who currently serves in the United States House of Representatives representing New York’s 1st district, was the victim of an attempted stabbing while on stage during a campaign rally at the VFW on Macedon Center Road in Perinton. Zeldin’s attacker, who was later identified and charged for federal assault, climbed onstage as Zeldin spoke, appearing to wear a spiked object on his hand and assaulted the Congressman saying, “You’re done,” before he was apprehended by AMVETS national Director Joe Chenelly.

The congressman predicted in a tweet shortly after, “The attacker will likely be instantly released under NY’s laws.” The assailant was released shortly after arraignment. 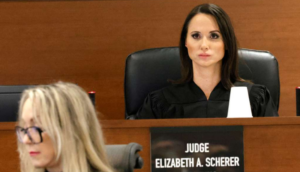 Judge in Parkland Shooter's Sentencing Trial Refuses to Step Down