Lush is launching a public campaign opposing a section of the United Kingdom’s Nationality and Borders Bills.

Through March 6, the cosmetic retailer, known for its soaps and shower products, will install window displays with the tagline, “Don’t let the Government rip up support for modern slavery survivors.”

Lush and 40 charities are publicly opposing Part 5 of the Bill which they contend will end the guarantee the victims of modern slavery the right to support, which includes safe housing, counseling, and financial support.

The window displays at all 101 of the brand’s U.K. locations will include a QR that will link to a website for After Exploitation’s Scrap Part 5 campaign. On the page, viewers can send an email to their MP asking them to take action on Part 5 in less than a minute.

After Exploitation hopes the email campaign will “embolden peers in the House of Lords to push back against the damaging changes at Report Stage.”

“With these controversial modern slavery changes due to be debated by the Lords any day this week, Lush couldn’t have announced their support for #ScrapPart5 at a more pivotal time for survivors,” said Maya Esslemont, Director of After Exploitation in the Feb. 28 announcement. “We only have a matter of days to stop the Government from introducing new exemptions, which would punish survivors of criminal exploitation and take support away from those too traumatized to share details of their abuse ‘fast enough.’”

Several of the core policies of the bill, proposed by Home Secretary Priti Patel, were blocked following a vote in the House of Lords on March 1. This includes Clause 11 which would “see asylum seekers who come to Britain via unauthorized routes – such as in small boats or by stowing away in trucks – criminalized and blocked from being granted refugee status in the UK, regardless of how strong their claim is.”

Those found in violation of this clause would have been confirmed to prison or given a temporary immigration status that affords them no benefits and is subject to removal reassessment.

The UNHCR, the UN’s Refugee Agency, said this measure would have led to “unnecessary suffering to thousands of refugees fleeing war and persecution, delay and perhaps impede integration and therefore likely result in greater costs to the taxpayer” in a March 2 statement.

The Lords had also removed clause 9 which would have granted the home secretary the authority to remove a person’s British citizenship without being obligated to notify them provided she felt the decision was a matter of national security, diplomacy or in the public interest.

The U.K. government can terminate citizenship but not without prior notification.

Additionally, “Ms. Patel has claimed that suggestions it will have a disproportionate impact on non-white British citizens or those with dual passports are ‘simply untrue,’” per The Independent.

Lush’s Ethics Director Hilary Jones told Bustle that opposing Part 5 of the bill was a necessity as “modern-day slavery is still a reality in supply chains, both in the UK and worldwide, and companies have rightly been required to put in extra measures to root it out.”

“It is therefore crucially important that once victims have been identified they are able to access the help and support they need to get their life back,” said Jones. “Now is not the time to reduce Government support for these incredibly vulnerable and abused individuals.”

In 2021, more the 14,500 migrants illegally entered the United Kingdom by crossing the English Channel in small boats.

Migration Watch UK said that the benefits to crossing outweigh the risks and therefore encourage migrants to make the often dangerous journey.

“The incentives are skewed so that they encourage, rather than discourage, illegal (and dangerous) trips that often lead to asylum abuse,” the organization told the Gatestone Institute.

Patel’s Nationality and Border Bill was originally introduced in July of 2021. With a 67 vote majority, it was passed by the House of Commons. 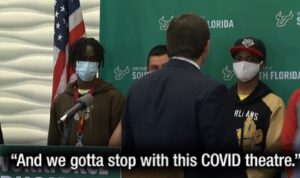 WATCH: DeSantis Tells Students to Take Their Masks Off, 'We’ve Gotta Stop With This COVID Theater'