'By any measure, the pandemic in the United States has ended,’ said the congressman

Congressman Paul Gosar of Arizona is leading an effort to repeal the national emergency declaration extended by President Biden on multiple occasions in response to the global outbreak of COVID-19.

Terminating the declaration would also end extended presidential powers currently granted to Biden. In addition to Gosar, 35 members of the House of Representatives have signed as co-sponsors.

This is the first piece of legislation Gosar has introduced during the 118th Congress.

“Emergency powers were created to give the executive branch flexibility to respond to a range of crises facing the United States. Importantly, emergency declarations require Congress to meet every six months to consider whether the emergency should be extended or terminated,” Gosar said in a statement. “By any measure, the pandemic in the United States has ended.”

He noted that Biden said the pandemic was over during an interview with 60 Minutes in September and suggested that, despite his statement, the president has continued to extend the emergency declaration “to force Americans to live under extreme measures that deprive us of our freedoms.”

“There is no ongoing COVID-19 emergency to justify the continuation of the national emergency declaration. Cases are down and most Americans have returned to a pre-pandemic normalcy,” said Gosar. “This hardly sounds like a country under a national emergency which is why I am calling on my colleagues and Mr. Biden to reverse course and move to give the People back their say in government.”

The national emergency declaration was first enacted under President Donald Trump on March 13, 2020 as the world began to report increasing cases of COVID-19, which had been documented at the end of 2019 in China.

The effectiveness of the checks and balances written into the National Emergencies Act has been debated among legal and policy experts.

In an essay for Law & Liberty in 2019, Associate Professor of Political Science at Texas A&M University James R. Rogers wrote that “it seems likely President Trump actually welcomes the drama a declaration of national emergency would create.” Rogers said the Act “does not itself grant or delegate any emergency powers to the president” and that the “declaration requirement is a congressional requirement placed on the president both to trigger public attention to the president’s action and to create the possibility of a congressional negative on the president’s action.”

The Brennan Center for Justice argues that the current form of the Act lacks sufficient protection to prevent abuse.

“Congress can vote to end an emergency, but it effectively needs a veto-proof majority to do so,” per the Brennan Center.

More than two years after the onset of the virus, political leaders from across the country have urged Biden to terminate emergency measures that are no longer regarded as necessary.

A group of 25 governors signed a letter to the president, calling on him to end the Federal Public Health Emergency in December.

“While the virus will be with us for some time, the emergency phase of the pandemic is behind us. We have come so far since the beginning of the pandemic – we now have the tools and information necessary to help protect our communities from COVID-19,” the coalition wrote. “It is time we move on from the pandemic and get back to life as normal.”

The PHE is negatively affecting states, primarily by artificially growing our population covered under Medicaid (both traditional and expanded populations), regardless of whether individuals continue to be eligible under the program. While the enhanced federal match provides some assistance to blunt the increasing costs due to higher enrollment numbers in our Medicaid programs, states are required to increase our non-federal match to adequately cover all enrollees and cannot disenroll members from the program unless they do so voluntarily. Making the situation worse, we know that a considerable number of individuals have returned to employer sponsored coverage or are receiving coverage through the individual market, and yet states still must still account and pay for their Medicaid enrollment in our non-federal share. This is costing states hundreds of millions of dollars.

Gosar’s initiative has been celebrated by other members of Congress.

“I proudly support this resolution. America does not have a COVID emergency and the President shouldn’t be allowed to govern as if we do,” said Wyoming Congresswoman Harriet Hageman, who took over the seat previously held by Liz Cheney. “The federal government should never again be allowed to take away our rights – to assemble, to worship, to travel, to visit sick loved ones, to keep our medical information private, and to earn a living. There are many critical lessons to learn from how our government overreached in responding to this pandemic and I look forward to a full investigation by the House of Representatives.”

“Congress must reclaim its critical check on the power of the executive branch,” he said. “These national emergency powers were never intended to be extended indefinitely.” 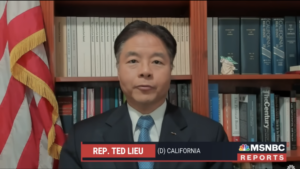