Congressman Burgess Owens has announced that he will not participate in Wednesday’s debate over objections about one of the moderators.

The moderator in question was Salt Lake Tribune Executive Editor Lauren Gustus, who supported and defended her paper’s publication of a cartoon comparing Rep. Owens to a member of the KKK.

Rep. Owens had requested that the Utah Debate Commission replace Gustus, but his request was denied.

“I cannot, in good conscience, have anything to do with the racist Salt Lake Tribune and will therefore not participate in this debate,” said Owens in a video posted to his social media.

In the video, Rep. Owens says that “as a 10-year-old in the 1960s segregated South, I witnessed a life-changing event. As my mother and little sister were using a ‘white woman’s only’ restroom at a service station, two white men attempted to break down the door to pull them out. I watched as my dad successfully fought these men off and afterwards ripped up the card to that gas station chain. Fifty years later, when talking about this event, my dad told me with pride ‘Burgie, I never bought another drop of gas from that gas station chain.’ It was a promise that he made and kept until the day he died.”

The congressman said that those values inspired his decision to withdraw from the debate.

“Last year, the Salt Lake Tribune published a racist cartoon depicting me as a KKK member, the very same hate group that terrorized my family and my race as a youth in the South,” Rep. Owens said. “The moderator selected by the Utah Debate Commission not only supported this bigoted cartoon, but she doubled down and defended it, even after the entire Utah delegation openly stated their disgust for such an ugly attack.”

We expect bias from liberal media, but racism is where I draw the line. Watch my full statement on tonight’s debate👇🏾pic.twitter.com/VJcC4XULCQ

The artist who drew the cartoon, Pat Bagley, was unapologetic for the offense it caused.

Here is the “racist” cartoon @BurgessOwens objects to

I make no apologies. Quotation is not defamation. I wasn’t the one here repeating 70-year-old KKK slanders against the weak and powerless 1/ pic.twitter.com/8jvhBDLxnf

“I make no apologies. Quotation is not defamation. I wasn’t the one here repeating 70-year-old KKK slanders against the weak and powerless,” Bagley tweeted.

“Despite our entire delegation’s calls to remove the cartoon, issue an apology, and hold themselves to a higher standard, those at the Tribune did nothing,” the statement read. “We do not believe it to be in the spirit of good debate for our friend and colleague to be subjected to questions from the person who approved the image and refused to take it down—even after being advised of its offensive nature.”

Owens has offered to hold separate debates on Oct. 22 and Oct. 29, which McDonald has accepted. 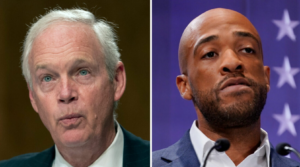