The bill now heads to President Biden for a final signature

Wednesday Morning, House Democrats approved a measure to raise the debt ceiling by $2.5 trillion, staving off a potential default and delaying a high-stakes fiscal fight until after the 2022 midterm election.

The House voted 221-209 in the early hours of Wednesday morning to approve the bill, with Rep. Adam Kinzinger being the lone Republican to break ranks and vote with the Democrats.

The vote in the House came less than a week after lawmakers struck a bipartisan deal that would allow Democrats to pass the increase and Republicans to abstain. The deal also helped to avoid putting the country at risk of default on a critical Dec. 15 deadline.

The Senate adopted the proposal mid-day Tuesday, and the bill will now go to President Biden for his signature.

The debt ceiling approximates the maximum amount under the law that the U.S. government can borrow to pay its bills. Without an increase or suspension of the cap, the country eventually would default on its total debts.

According to the Treasury Department, the current U.S. debt reached nearly $29 trillion in early December.

GOP leaders repeatedly have refused to support raising the debt ceiling, jeopardizing efforts by Democrats in the Senate, who lack the majority to act on their own.

Treasury Secretary Janet Yellen has repeatedly warned the debt limit could be reached on Dec. 15. This warning from Yellen recently left Congress little time to resolve the issue.

Some have forecasted that a national default would spark economic disaster and party leaders on both sides of the aisle have agreed that default must be avoided at any cost.

Republicans have insisted throughout negotiations that Democrats take sole responsibility for raising the debt limit. In response, Congress passed legislation last week to create a fast-track process to allow Democrats to raise the debt limit in the Senate without help from Republicans. 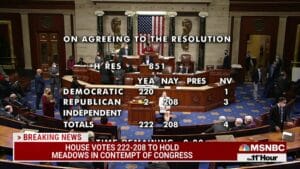 House Votes to Hold Meadows in Contempt Over Jan 6 Hearings