'We cannot afford delay in this vital war effort,' said Biden as he called on lawmakers to expedite funding

On Monday evening, congressional leaders reached a deal to send $39.8 billion to Ukraine to support its months-long war against Russia.

The deal is expected to reach President Biden’s desk very soon as Congress sets aside a push for more funding for COVID pandemic relief.

The proposed aid package will likely come to the House floor for a vote as early as Tuesday this week. If the measure clears the house, the Senate is expected to approve the large tranche of funding for Ukraine quickly.

According to multiple reports, President Joe Biden urged Congress on Monday to quickly approve a multibillion-dollar aid package for Ukraine before trying to pass a new round of COVID-19 funding.

According to CNBC, Biden noted his focus on additional COVID funding despite the Ukrainian aid.

Biden said, “Let me be clear, as vital as it is to help Ukraine combat Russian aggression, it is equally vital to help Americans combat COVID. Without timely COVID funding, more Americans will die needlessly.”

Democratic leaders have asked their party and bipartisan supporters not to delay the U.S. aid to Ukraine as the Russian assault intensifies.

According to Politico, Senator Tim Kaine said he was “fine” with the new strategy as long as COVID aid eventually passes.

Biden’s willingness to accept a decoupling of the two funding objectives is a reversal from his insistence last month that the Ukrainian aid and the pandemic funding be bundled.

Biden said he “had recommended that Congress take overdue action on much-needed funding for COVID treatments, vaccines and tests, as part of the Ukraine Supplemental bill,” but said that the coupling might slow down the much-needed aid to the embattled region.

“We cannot afford delay in this vital war effort. Hence, I am prepared to accept that these two measures move separately so that the Ukrainian aid bill can get to my desk right away,” said Biden, who warned that shipments of weapons and other aid would need to be halted in about ten days without new funding for Ukraine.

On Monday, the President signed legislation to make it easier for the U.S. to send military equipment to Ukraine as the Eastern European country battles the ongoing Russian invasion.

The Ukraine Democracy Defense Lend-Lease Act of 2022 expands the authority to lend or lease defense articles to Ukraine or Eastern European countries.

“I’m signing a bill that provides another important tool in our efforts to support the government of Ukraine and the Ukrainian people in their fight to defend their country and their democracy against Putin’s brutal war — and it is brutal,” Biden said during Monday’s signing in the Oval Office. 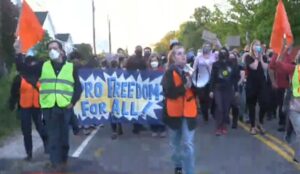