Congress Holds Moment of Silence In Honor Of Jan. 6 Anniversary

Congress marked the one-year anniversary of the event of Jan. 6 with a moment of silence at noon today.

Speaking just before the 12 P.M, Congresswoman Amy Klobuchar thanked the staff and police present in the chamber for their work. She said it was time to “recommit ourselves to making sure nothing like this ever happens again.”

“We devote this moment of silence to those who stood up, not only of this building, not only for the people who worked here, but for our very democracy itself,” Klobuchar said.

Speaker of the House Nancy Pelosi called the house to order and introduced Chaplain Margaret Grun Kibben, who prayed in honor of a day of “national discord and despair.”

“Revive in us our shared commitment to our country’s highest ideals,” Kibben said in her prayers, including “the aggrieved, the skeptical” among those in need.

The Chaplin also invoked the word’s of President Abraham Lincoln, who said after the Civil War during his second inaugural address “With malice toward none; with charity for all…  with firmness in the right, as God gives us to see the right, let us strive on to finish the work we are in; to bind up the nation’s wounds; to care for him who shall have borne the battle, and for his widow, and his orphan—to do all which may achieve and cherish, a just and a lasting peace, among ourselves, and with all nations.”

Pelosi used the same phrase during an interview with the Associated Press on Jan. 5.

“We have to extend the hand of friendship,” The Califonia congresswomen said. Pelosi compared the current national divide to the end of the Civil War, when “Lincoln said, ‘With malice toward none, with charity toward all.’”

“This has to be a period of remembrance, of reconciliation,” she added during the interview.

“Democracy won that night,” she said. “These people, because of the courageous work of the Capitol Police and Metropolitan Police and others, they were deterred in their action to stop the peaceful transfer of power. They lost.”

The speaker’s comments came after the House minority leader, Representative Kevin McCarthy said in a letter to his colleagues that the Democrats are using Jan. 6, 2022 “as a partisan political weapon to further divide our country.”

Following the chaplin’s remarks, Pelosi addressed Congress. She said Congress was able to “defeat the insurrection” because of the staff members and police who were present that day.

She said that because of their support, Congress was able to return to the chamber and verify the votes of the election.

Pelosi once again drew a parallel to the current status of the nation and the end of the Civil War by quoting President Lincoln during her address.

“As we reflect on that day, we remember that the insurrectionist not only to attack the building but to undermine democracy itself,” she said. “But the assault did not deter us from our duty.”

She noted that the president’s quote “We hold the power, therefore we bear the responsibility” and once more repeating Lincoln’s malice quote. 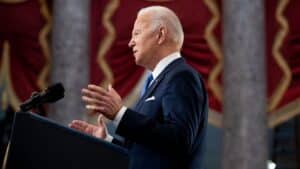 Biden Speaks on the Anniversary of the January 6th Capitol Riots