Coptic Christians are approximately 10% of the population on Egypt

A Coptic Christian was sworn in as head of Egypt’s Supreme Constitutional Court for the first time in the nation’s history.

Judge Boulos Fahmy was sworn in on Feb. 9 by President Abel Fattah el-Sissi. He is the nineteenth person to lead the nation’s highest court.

As directed by law, El-Sissi selected Fahmy from the five oldest of the nation’s 15 sitting judges.  Fahmy had been the court’s General Secretariat since 2014 and previously led the Cairo Appeals Court. He will serve one four-year term.

“The SCC is the country’s autonomous and independent judicial authority in charge of ensuring that the domestic laws and regulations are in line with the constitution,” notes Ahram Online.

Egypt is a majority Muslim country. The election of Fahmy, a member of the Egyptian branch of Orthodox Christianity, was called “a giant move” for political and civil rights by the head of the government’s National Council for Human Rights Moushira Khattab, per AP News.

Ishak Ibrahim, an expert on Christian affairs in Egypt, wrote on Facebook that Fahmy’s appointment is unlikely to significantly end discrimination against Christians. He noted that Christians are significantly underrepresented in the government.

“It will not have a significant impact on eliminating discrimination and ensuring the opportunity for all citizens with justice and equality,” Ibrahim said. “We’ll be able to say there’s a significant improvement when we find the percentage (of Christians holding posts) has moved from around 2% to a percentage close to their numerical one.”

Coptic Christians in Egypt are frequently the subject of violent attacks by Islamic militants.

Between September and December of 2021, 17 Egyptian Coptic Christians went missing in Libya. Coptic students were reportedly ordered to remove any jewelry with a cross by a headmaster in the Ezbat Beshri area during this period.

Christian shops were damaged and one man was killed in Alexandria following an attack by three extremists in December of 2020.

“Although arrests were made, local Christians have expressed fear that the extremists will be declared mentally ill and thus not receive the full punishment according to the law,” International Christian Concern wrote at the time. “This fear is based on an established pattern of Egypt using claims of mental illness to reduce the penalties of those who attack Christians.”

Between August 2018 and April 2019, Coptic churches in the Minya province 130 miles south of Cairo had experienced mob attacks on three separate occasions. Videos circulated in 2019 of Coptic Christian men in the Sohag province being beaten with sticks. A local church closed as a result of the violence, per the Wall Street Journal.

A gunman opened fire outside of a Coptic church in a suburb of Cairo on Dec. 29, 2017, killing eight Coptics and one police officer.

In May of the same year, masked gunmen attacked a bus of Coptic Christians visiting a monastery in Cairo. The provincial government reported that 26 people had been killed.

Two churches were bombed in 2017 on April 9 — Palm Sunday. At least 45 members of the Christian minority group were killed. Both attacks were claimed by ISIS and el-Sisi declared a state of emergency.

El-Sissi took office in 2014 and has gained a reputation as an ally to Coptics in the nation. He regularly attends Orthodox Christmas Mass to show solidarity with Coptic Christians and permitted the construction of churches across Egypt. He also appointed the first female Coptic Christian provincial governor in 2018. 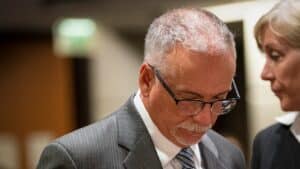