China’s state-run media just predicted the “peaceful reunification” of its mainland with Taiwan, calling a future with both territories under the singular banner of “China” both “inevitable and necessary.”

The declaration was made on Oct. 21 in China Daily, a newspaper widely considered to be an extension of the Chinese Communist Party (CCP), based on the publication’s “extreme bias” and consistent “editorial positions that promote state propaganda,” according to Media Bias Fact Check.

“The wheels of history are rolling on toward China’s reunification,” Jinping told officials at the congress, which is only held twice-per-decade.

Though Jinping championed a peaceful reunification, he did not rule out the use of force.

U.S. foreign policy has consistently maintained a policy of “strategic ambiguity” when it comes to questions surrounding China attempting to re-take Taiwan. However, it has been thought that the U.S. would provide assistance to Taiwan in the event of a conflict.

“To date, there is no known case in which an American president failed to send forces to support the defense of Taiwan in response to a credible CCP threat,” Ian Easton, China analyst and senior director at the Project 2049 Institute, argues.

“If this track record is indicative of future performance, the years ahead are likely to see the U.S. government continually improve its operational readiness to defend Taiwan in accordance with the evolving threat picture,” he said. “In times of crisis, American leaders will likely send overwhelming national resources to the Taiwan Strait area and make their commitments to Taiwan’s defense more explicit in hopes of convincing the PRC to deescalate tensions.”

China, however, has looked for cracks in U.S. resolve over the past two years, ratcheting up rhetoric and tensions amid multiple foreign policy crises faced by the Biden administration.

After the U.S. hastily pulled out of Afghanistan in August 2021, China conducted live fire naval drills and pledged to “crush” any U.S. troops on Taiwanese territory. Alongside China’s show of military strength, Chinese state media churned out images of desperate Afghans pouring into the Kabul airport, hoping to flee the Afghanistan.

Many believed it was a clear message to Taiwan that the U.S. could not be trusted as a reliable partner to defend it.

This spring, experts cautioned that China is very closely watching how Biden handles the Russia-Ukraine conflict and will use any weakness from the White House as an invitation to move on Taiwan.

In late August, for the first time ever, Taiwan’s military fired warning shots at a Chinese drone after Beijing stepped up military drills following a visit to Taiwan from U.S. House Speaker Nancy Pelosi.

After Jinping’s presentation on Oct. 16, U.S. Secretary of State Antony Blinken admitted, “There has been a change in the approach from Beijing toward Taiwan in recent years” — a possible acknowledgement that now China may be more likely to attempt to re-take Taiwan than in years past.

“Our focus is on preserving stability and security throughout the region. Our policy in regards to China and Taiwan has not changed,” he said. “Our focus will continue to be on deterring potential military action and to calling on both sides to resolve these issues peacefully.”

China Daily says the U.S. only supports Taiwan “to maintain its own global hegemony.”

The state run media outlet also vows, “Complete national reunification is inevitable and necessary for the great rejuvenation of the Chinese nation.” 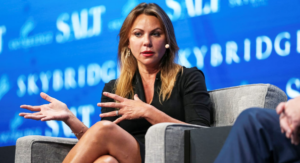