China issued sanctions against Raytheon Technologies and Lockheed Martin citing their sales of weapons to Taiwan.

The two defense companies are part of a $100 million deal to maintain Taiwan’s missile defense system which has the authorization of the United States government.

In an announcement on Feb. 21, China’s Foreign Ministry spokesperson Wang Wenbin said his country will “continue to take all necessary measures to firmly safeguard its sovereignty and security interests in accordance with the development of the situation.”

According to Wang, the Feb. 7 deal “undermined China’s security interests, seriously undermined China-U.S. relations and peace and stability in the Taiwan Strait.”

“In accordance with the relevant stipulations in China’s anti-foreign sanctions law, the Chinese government has decided to take countermeasures on the infringing acts of Raytheon Technologies and Lockheed Martin,” Wang said.

For several years, Taiwan has contributed to an ongoing tension between China and the United States. China claims the independent, self-governed island as a territory although it formally split from the communist nation after a civil war in 1949.

Taiwan’s main ally is the United States, which is legally obligated to aid Taiwan’s defense means under the 1979 Taiwan Relations Act. The government regards the practice as a necessary step in ensuring peace in Asia.

The Department of State classifies the relationship as “robust” but “unofficial” and says that America “does not support Taiwan independence.”

“The United States insists on the peaceful resolution of cross-Strait differences, opposes unilateral changes to the status quo by either side, and encourages both sides to continue their constructive dialogue on the basis of dignity and respect,” according to the Department’s website.

The Chinese government contends the arms sales violate the”one-China principle” which contends there is only one sovereign state and that Taiwan is a part of the Republic of China. Under the principle, any country seeking a diplomatic relationship with Beijing must not have any official ties to Taipei, the capital of Taiwan.

“China regularly says Taiwan is the most important and sensitive issue in its ties with Washington, which are also strained over trade and human rights disputes,” per Reuters.

Raytheon, Lockheed Martin as well as Boeing Co. were sanctioned by China in October of 2020 for supplying weapons to Taiwan. China threatened to invade the island as well as cut ties with Boeing. China represents a significant portion of the American company’s commercial aircraft sales.

Raytheon and Lockheed Martin were also sanctioned by Beijing in 2019 although the details and enforcement of both measures were not revealed. 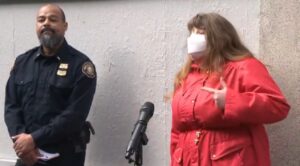