Chicago Public Schools have canceled classes for a second straight day after the teachers union voted to refuse to teach in person.

On Wednesday evening, the district announced that there would be no classes on Thursday, remote or in person.

UPDATE ON CLASSES FOR 1/6: There will be no in-person or remote instruction for CPS students Thursday, January 6. All after-school programs and other events are also canceled. For information on resources and Friday, January 7, please review the attached letter. (1/2) pic.twitter.com/XNrZkfAnlD

Lightfoot did not hold back her contempt for the union during Wednesday evening’s press conference.

“I will not allow [the Chicago Teachers Union] to take our children hostage. I will not allow them to compromise the future of this generation of CPS students. That is not going to happen,” Lightfoot said.

We are committed to remaining at the table with CTU leadership and negotiating a fair agreement.

But what we cannot accept is unilateral action to shut down the entire district, depriving hundreds of thousands of students of the safe, in-person schooling environment they need.

One of the demands from the union is mandatory COVID testing for students, which Lightfoot said will not happen because it is “morally wrong.”

“We are not going to rob parents of their right and their obligation to tell us if they want testing or not on their children. It’s not going to happen. It’s morally wrong,” Lightfoot said.

Lightfoot also asserted that the city will not be paying teachers during an “unlawful, unilateral strike” and will not allow them to teach remotely.

Chicago today: Mayor Lori Lightfoot locked out teachers from teaching remotely as her administration fights with the union over COVID-19 concerns that she calls “fearmongering and hysteria.”

During a press conference the previous night, Lightfoot accused union leadership of “politicizing the pandemic” and said that teacher’s who do not report for work will be placed on “no-pay” status.

“I have to tell you, it feels like ‘Groundhog Day,’ that we are here again,” Lightfoot said regarding repeated problems and issues with the union. “There is no basis in the data, the science, or common sense for us to shut an entire system down when we can surgically do this at a school level.”

The union does not appear to be backing down, posting on Twitter that “the action will end when one of the following conditions is met: The current surge in cases substantially subsides, or the mayor’s team at CPS signs an agreement establishing conditions for return that are voted on and approved by the the CTU House of Delegates.”

The action will end when one of the following conditions is met: The current surge in cases substantially subsides, or the mayor’s team at CPS signs an agreement establishing conditions for return that are voted on and approved by the the CTU House of Delegates. 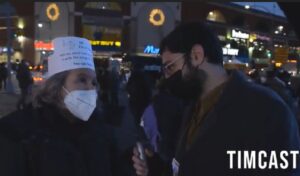