The tweet was deleted after receiving swift backlash across social media.

“Kyle Rittenhouse testified in his murder trial yesterday, breaking down in tears as he told the jury he murdered two men at a Black Lives Matter protest last year in self defense,” CBS tweeted.

Rittenhouse did not say that he “murdered two men.”

Rittenhouse never told the jury this. CBS better lawyer up. They’re about to get sued. pic.twitter.com/MpMgWEMZFJ

While being questioned by Kenosha County Assistant District Attorney Thomas Binger, the teenager testified that he “stopped the threat” against his life.

“I did what I had to do to stop the person who was attacking me,” Rittenhouse said.

“By killing them?” Binger asked.

“Two of them passed away but I stopped the threat from attacking me,” replied Rittenhouse.

Rittenhouse broke down during his testimony, prompting the judge to call a recess.

“Some jurors watched with a look of sympathy as he cried. Rittenhouse’s mother sobbed in the courtroom watching her son,” Reuters reported. “Earlier in the night, Rittenhouse said Rosenbaum had threatened twice to kill him, first by saying that he would kill the teen if he caught him alone and then telling a group he was with ‘I’m going to cut your fucking hearts out.’ The slain man’s fiance testified that Rosenbaum had bipolar disorder.”

Rittenhouse has been charged over the deaths of Joseph Rosenbaum, 36, and Anthony Huber, 26, and injuring Gaige Grosskreutz, 27, during a riot in Kenosha, Wisconsin on Aug. 25, 2020.

Rittenhouse, who was 17 at the time of the incident, has pleaded not guilty. 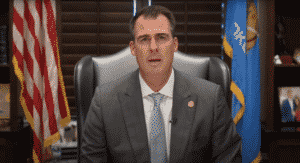