The activation of the D.C. National Guard would be the first use of a new law created after the Jan. 6 Capitol Riots

Law enforcement agencies around Washington, D.C., have asked the Pentagon for assistance before President Biden’s first State of the Union address, as the event is expected to coincide with truck convoy protests.

Kirby said the Defense Department is reviewing the request but has yet to decide if they will approve it.

The request was first reported by Military Times on Monday. According to internal directives obtained by the outlet, National Guard troops were notified of a potential activation between Feb. 22 and Mar. 7.

If activated, the guard would provide vehicles and personnel at “43 critical blocking positions 24/7,” according to Military Times.

Law enforcement agencies around D.C. have received reports of a potential truck convoy planning to block roads in major metropolitan cities in the United States.

Last week, the Freedom Convoy USA 2022 announced they would be making a cross-country trek, with the destination being D.C. in time for the State of The Union address. The convoy is protesting vaccine mandates and other political situations it feels have violated the rights and freedoms of U.S. citizens. The intent appears to be similar to the protests and blockades Canadian truck drivers formed in the past three weeks.

“Law enforcement agencies across the National Capital Region are aware of plans for a series of truck convoys arriving in Washington, DC around the time of the State of the Union,” the U.S. Capitol Police said in a statement.

“The USCP is closely coordinating with local, state, and federal law enforcement agencies, including D.C.’s Metropolitan Police Department, the United States Park Police, the United States Secret Service, and other allied agencies to include the D.C. National Guard,” the statement continued.

If the D.C. National Guard is activated, it would be one of the first uses of a new law to ease requests for emergency assistance from the National Guard. The new law was enacted following the Jan. 6, 2021 Capitol riots. 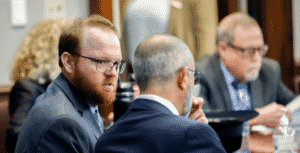