Canceling a Culture is Not The Answer: Lessons From Manzanar

If the actions of Western companies and organizations are anything to go by, 2022 feels more like 1942 (the year Executive Order 9066 was enacted) than 2001 (the year of the 9/11 attacks), or even 1962 (the year  Operation Peter Pan concluded as well as the Cuban Missile Crisis). Amid the Putin government’s invasion of Ukraine, the displacement of Ukrainians, and the swift backlash against the  Russia, Russia-themed art is under attack like never before.

Netflix just canceled a planned adaptation of Leo Tolstoy’s Anna Karenina. The Glasgow Film Festival removed two Russian films from its screenings, claiming they were funded by the Russian government.  A Montreal symphony decided to cancel Russian pianist Alexander Malofeev’s performance after the orchestra deemed it “inappropriate.” Despite the fact that Malofeev criticized the Russian invasion, his performance was not rescheduled.

He wrote: “The truth is that every Russian will feel guilty for decades because of the terrible and bloody decision that none of us could influence and predict. … The most important thing now is to stop the blood. All I know is that the spread of hatred will not help in any way, but only cause more suffering.”

Malofeev’s condemnation of Putin’s policy wasn’t enough to prevent his cancellation, and he was far from the only one. The Cardiff Philharmonic Orchestra scuttled an announced Tchaikovsky concert, stating: “A member of the orchestra has family directly involved in the Ukraine situation and we are trying to respect that situation during the immediate term.”

A backlash against one particular culture during wartime in the West may seem like a throwback towards actions like the internment of Japanese-Americans during World War II.

Farewell to Manzanar is a memoir by Japanese-American author Jeanne Wakatsuki Houston. A Nisei (born to a Japanese immigrant) internee at Manzanar War Relocation Center born in 1934, Wakatsuki Houston’s memoir weaves together coming of age and the harrowing experience of the internment of Japanese-Americans in California during World War II. Fearing that Americans of Japanese ancestry could be spies for General Hideki Tojo’s government in Japan, the Franklin D. Roosevelt administration forced Americans of Japanese descent on the West Coast into internment camps via his Executive Order 9066. The order was eventually overturned a few years later in 1944 as the result of the ex parte Endo Supreme Court decision.

Throughout the Cold War, while the governments of communist states such as the Soviet Union and Cuba were rightfully opposed, the Russian and Cuban cultures were not attacked on the same level as Japanese culture during the Second World War.

In fact, Operation Peter Pan and the Cuban Adjustment Act ensured that Cuban children and adults escaping Castro’s regime were welcomed into the United States, and Soviet dissidents of Russian ancestry such as Andrei Sakharov and Aleksandr Solzhenitsyn were embraced throughout the latter half of 20th century. The legend of Grand Duchess Anastasia Romanov, believed to be the last surviving member of the pre-Soviet Russian royal family, was depicted through multiple films and miniseries.

Are the original books of famed Russian authors such as Leo Tolstoy, Fyodor Dostoevsky and Boris Pasternak next on the banning block? The aforementioned authors of War and Peace, Crime and Punishment, and Doctor Zhivago have contributed to a literary canon that has been celebrated for generations. The latter novel, a work criticizing the Soviet October Revolution, received considerable approbation abroad, earning Boris Pasternak the 1957 Nobel Prize in Literature.

It should be worth noting that the United States’ welcoming approach during the Cold War toward refugees from communism likely paid off: both Cuban exiles and Soviet defectors would help the U.S., assisting in bringing about the fall of the Iron Curtain and the dissolution of the Soviet system. Conversely, FDR’s xenophobic approach produced few if any tangible benefits while antagonizing Japanese-Americans and driving unnecessary wedges in American society during the conflict with the Axis Powers.

Contrast the Cold War’s “battle of ideas” narrative with the contemporary 21st century approach. Two decades in, today’s mainstream media outlets and cultural arbiters are in no position to shame others while claiming moral superiority for themselves. For all the evocation of “democracy” by woke cancel culture enthusiasts, their willingness to cancel Russian performers and even American works depicting Russia underscores an ironic, hypocritical, xenophobic undercurrent. Attacking the achievements of one country or one culture undermines wokeness’ entire raison d’etre of cultural equity and diversity. It should be noted that the vast majority of Russian authors celebrated by the West were never supporters of the authoritarians or totalitarians in charge: many were persecuted either by Tsarist Russia or the Soviet regime. A number of prominent Russian artists oppose Putin and deplore the Russian government’s latest war.

Despite statements from Malofeev and others against the Putin government’s invasion, the principle of separating a country’s government from its people and its culture may become increasingly disregarded. Mariya Makivchuk, a Ukrainian residing in Montreal, said “It’s time to take concrete action and join the global community of cultural institutions and boycott the Russian cultural product.”

The Orchestre symphonique de Montréal (OSM) stated with respect to the Russian pianist: “We look forward to welcoming this exceptional artist when the context allows it.”

The notion of banning Malofeev or Tolstoy is strikingly reminiscent of the prohibition on, of all things, the saxophone. The brass-bodied woodwind instrument defining the rise of jazz was offensive to both Stalin’s communists as well as Hitler’s fascists. The sax is a quintessential emblem of Americana originally designed by a Belgian. Using this same logic, would anyone believe that it was right to cancel the saxophone as restitution for past injustices by Americans and Belgians? It’s hard to know these days.

Solidarity with one country and hostility towards another in a time of war is hardly anything new in the history of international relations. Yet the experiences of Jeanne Wakatsuki Houston and other Japanese-American internees should teach us there is little to gain and much to lose from refusing to distinguish between a country’s government and its people. 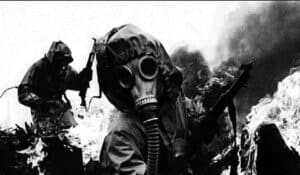