Two seventh-grade teachers advised educators on the best way to identify and recruit students for their LGBTQ clubs as part of an official California Teachers Association conference.

Kelly Baraki and Lori Caldeira, both of whom are employed by Buena Vista Middle School in Salinas, Calif., led the seminar at the 2021 LGBTQ+ Issues Conference, Beyond the Binary: Identity & Imagining Possibilities, which was held Oct. 29 to 31.

During the Palm Springs conference, attendees reported they were advised on ways to subvert parents’ authority and school administrators’ regulations. The program also included advice on ways to conceal activities related to gender inclusion and sexual orientation.

A recording of Caldeira and Baraki’s workshop, titled “How we run a ‘GSA’ in Conservative Communities,” was leaked to The Epoch Times and Abigail Shrier, author of “Irreversible Damage: The Transgender Craze Seducing Our Daughters.”

The pair advised teachers to run their clubs with an air of plausible deniability, including disguising the club’s name and not keeping club rosters or records.

“In fact, sometimes we don’t really want to keep records because if parents get upset that their kids are coming?” said Caldeira, who is also an LGBTQ club leader. “We’re like, ‘Yeah, I don’t know. Maybe they came?’ You know, we would never want a kid to get in trouble for attending if their parents are upset.”

The presenters also discussed searching for students’ online activities to identify potential new club members. They told a story about receiving criticism from a concerned parent after Caldeira and Baraki included LGBTQ content in an anti-bullying presentation.

“Next year, we’re going to do just a little mind-trick on our sixth graders. They were last to go through this presentation and the gender stuff was the last thing we talked about,” Baraki said. “So next year, they’ll be going first with this presentation and the gender stuff will be the first thing they hear about. Hopefully to mitigate, you know, these kind of responses, right?”

The teachers thanked the CTA for making their efforts possible, both by offering resources and tools and for providing Caldeira tenure, which protects her from being fired.

She added: “CTA has made it very clear that they are devoted to human rights and equity.”

In a Nov. 19 letter, the Spreckels Union School District staff said, “Many of the comments and themes stated in the are alarming, concerning, disappointing and do not in any way reflect the District or the Board of Education’s policies and practices.”

The district has subsequently suspended the You Be You club, mandated sign-in sheets and parental permission slips for children to attend club meetings, and prohibited teachers from monitoring students’ online activity for any non-academic purposes

Editor’s Note: A previous version of this article did not include the fact that the same audio leaked to The Epoch Times was also concurrently sent to Shrier. The story has been updated accordingly. The story has also been updated with a response from the school district. 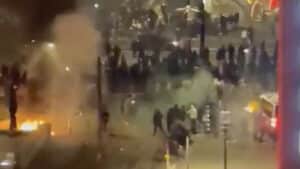 Dutch Citizens Take to the Streets of Amsterdam, Other Cities to Protest COVID Restrictions