The Superintendent of the Natomas Unified School District told reporters this week that his office has “no records” of any complaints against a local teacher who bragged in an undercover video about indoctrinating students with Communist ideology.

“We’ve heard … a student or parent reached out to the school in the district and tried to share these concerns, but we have no such records of that,” said Superintendent Chris Evans. “So if somebody has a copy of an email or something that’s time stamped and dated, I want to see that.”

The educator, identified as Gabriel Gipe, was seen in a video published by Project Veritas discussing his unconventional teaching methods.

“I have 180 days to turn [students] into revolutionaries,” he added.

The district released a statement shortly after the video was released:

“Yesterday, a group released an undercover video that has been covered extensively. In this video, a teacher at Inderkum High School was recorded sharing his educational approach that is disturbing and undermines the public’s trust. The district is aware of the approach of the interview and the editing used to create the video. In following the principles of democracy, Natomas Unified staff is following due process, the law, and spent the past two days investigating the alleged teacher actions and his classroom environment. As of today, this teacher was placed on paid leave because of his actions and choices in the classroom. Natomas Unified will be taking the legally required next steps to place the teacher on unpaid leave and fire the teacher. By taking a day and a half to investigate beyond the video, the district was able to learn more facts essential to the next steps. 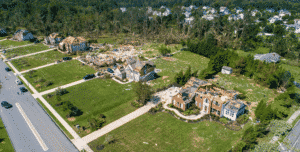 More Than 45 Deaths Reported in the Northeast Following Hurricane Ida