British feminist and YouTuber Kellie-Jay Keen-Minshull, better known as “Posie Parker,” says that she was visited by police for allegedly being “untoward about pedophiles” in one of her videos.

In a livestream on July 24 in which she described the incident, Keen-Minshull said that the Wiltshire Police informed her that her comments were being recorded as a “hate crime.”

“How can it be a hate crime to talk untoward about pedophiles?” Keen-Minshull said in the video. “There are people in this small town of mine who have had absolutely no police response to being burgled … there are people who go into local businesses and refuse to pay, yet the police don’t come. The police don’t care. But they’ll knock on my door?”

Keen-Minshull runs a campaign called Standing for Women and has gained a fair amount of notoriety in the UK for her bold stances on women’s issues and gender ideology. She is frequently targeted by transgender activists for being a “TERF,” or “trans exclusionary radical feminist.”

The activist said that the officers had informed her that a formal complaint was filed, but admitted that they had not even watched the video before coming to her home. It appeared that she was not sure which video was reported or what exactly she had said.

After being told that her comments were being recorded as a “hate crime,” the feminist asked for clarification about whether it was a “hate crime” or a “hate incident.”

Feminist website Reduxx explained that “under UK law, hate incidents are recorded complaints that are not deemed criminal while hate crimes are punishable under the law.”

Keen-Minshull said that she suspects someone had taken issue with her opinions about biological sex and gender, specifically that a man cannot become a woman. She refused to back down, however, reasserting her positions on the livestream after the police encounter.

She also had a message for the person who reported her.

“To the person who reported me… if you are a man who gets your rocks off wearing women’s clothing and you don’t care about the safety, dignity, or privacy of women and girls and you use women’s spaces, I’m going to say that you’re a predatory male. And if you want to be in those women’s spaces, where women are in a state of undress, I’m going to say that that particular fetish of yours is going to make you much more likely to be a pedophile,” Keen-Minshull said.

She continued, “you tell the man that reported me that I don’t care how he identifies, he is not welcome in women’s spaces… We won’t call them women, and they’re not going to take our language.”

Reduxx reports that Keen-Marshall is no stranger to having the police show up about her statements on the internet.

“In 2018, she was brought in for questioning by the West Yorkshire police for tweets targeted at Susie Green, the CEO of the trans charity Mermaids. Keen-Minshull tweeted that Green had taken her 16 year old son to Thailand for sex reassignment surgery due to it having been illegal in the United Kingdom for minors, which she called ‘castration,'” the report explains.

The police were called once again after Keen-Minshull accused Green of taking her child to the US to obtain puberty blockers, which were illegal in the UK at the time. The activist said that Green had “chemically castrated” her 16-year-old son.

Green later admitted that it was true she traveled to the US for the hormones, and that it had made her son’s surgical genital change operation more difficult.

Keen-Minshull was ultimately not charged with a crime over those tweets.

UPDATE: After massive public outcry about the police visit, the police department addressed the issue on Twitter and announced that no charges will be filed.

The Wiltshire Police Department wrote, “Following a report from a member of the public, officers visited a woman in Trowbridge to offer words of advice regarding comments made online which the complainant felt were inappropriate and offensive.”

“No further additional police action will take place and the matter has been closed. (2/5)

“No further additional police action will take place and the matter has been closed,” the department said.

“Having reviewed our response to this incident in relation to the new guidance from the College of Policing concerning hate crime incidents, we acknowledge that the response from the Force was not wholly proportionate,” the tweet thread continued. “However, it is important to state that our officers acted with the best intentions, working to the previous guidance, which only changed last week.”

“However, it is important to state that our officers acted with the best intentions, working to the previous guidance, which only changed last week. (4/5)

The thread concluded, “we are currently working on ensuring the latest national guidance is fully shared within our organisation to provide clarity to officers on how reports of this nature should be dealt with on a case by case basis to ensure a consistent and proportionate response.”

“We are currently working on ensuring the latest national guidance is fully shared within our organisation to provide clarity to officers on how reports of this nature should be dealt with on a case by case basis to ensure a consistent and proportionate response.” (5/5) 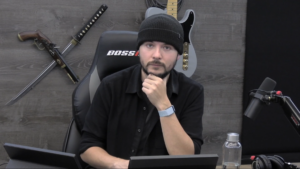 Timcast IRL SHUT DOWN Mid Stream, Crew Discusses Why Episode Was Removed And The Inner Workings Of The Company