'Somebody Didn't Pull A Permit, Somebody's Going To Get In Trouble With The Mayor's Office' Said 'The Whale' Star Of The Stunt

Brendan Fraser apologized for a 1997 stunt filmed for George of the Jungle during a Sunday screening of his new film The Whale.

Speaking on the red carpet with SFGate during the Mill Valley Film Festival, Fraser issued a light-hearted apology to San Francisco and the overall Bay Area regarding the stunt filmed on the Golden State Bridge for the 1997 live-action rendition of 1967’s animated television series of the same name.

“I have almost an apology to make,” Fraser said.

“When we were doing George of the Jungle, George goes to rescue a parachutist tangled in the Golden Gate Bridge. That means Disney put a mannequin hanging by a parachute from the uprights.”

It brought traffic to a standstill on either side of the bridge. My trailer was on the other side in a parking lot. I just remember watching the Golden Gate Bridge. There’s this dummy parachutist hanging from it. I had the TV on, and Oprah got interrupted because there was a special news report with helicopters saying a parachute is dangling on the bridge. And I’m going — wait a minute, I’m looking at the helicopters and TV — somebody didn’t pull a permit, somebody’s going to get in trouble with the mayor’s office. So I can only apologize for that.

Fraser later noted the George of the Jungle scene in a speech after the Mill Valley Film Festival presented the actor a lifetime achievement award for acting.

The actor received a six-minute standing ovation during the Venice Film Festival in early September for his performance in Darren Aronofsky’s new film, The Whale, which has brought a resurgence to Fraser’s popularity. Aronofsky’s film, based on Samuel D. Hunter’s 2012 play of the same name, features Fraser as an obese homosexual man and marks his first return to a starring role since 2013’s Breakout.

“They had this in common … I noticed that early in their stories, early on, there was a figure, sometimes a parent, sometimes a father, who spoke vindictively to them as children about their body weight,” said Fraser of Aronofsky’s new film. “It set in motion a pattern that stayed with them for the rest of their lives.”

While The Whale star has received accolades for his performance, some have criticized Aronofsky’s choice to cast Fraser in a “fat-suit.”

“We all want Brendan Fraser to have a great comeback. We all want this moment for him,” said Bros star Guy Branum. “But we also need to think about how much we are representing queer life and fat life through straight actors or prosthetics.” 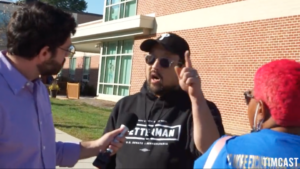