Former President Donald Trump has issued a statement about his “complete and total endorsement” of Washington congressional candidate Joe Kent.

Kent is a veteran, father, and a Gold Star husband who has gained popularity within the “Make America Great Again” movement for his America First policy positions.

On Tuesday, Trump issued a statement about how well Kent is doing in his race and reiterated his support.

for Congress. It is time to put America First and unite around an extraordinary person, Joe Kent—he has my Complete and Total Endorsement!”

Trump added, “It is time to put America First and unite around an extraordinary person, Joe Kent—he has my Complete and Total Endorsement!”

Kent enlisted in the Army as an infantryman at the age of 18 and eventually worked his way into the Ranger Regiment, followed by the Special Forces.

Following the terrorist attacks on 9/11, Kent took every opportunity to volunteer and serve in combat. He deployed 11 times.

On January 16th, 2019, Kent’s wife Shannon Kent was killed while fighting ISIS in Syria, leaving him to raise their two young sons.

“At that moment, I knew I had to step away from putting myself in physical danger so I could be there for our two young sons. Shannon was killed approximately one month after President Trump attempted to pull our troops out of Syria because we had met our military objective. This attempt to end a war brought out the Establishment’s true colors as they resisted him at every step,” the bio on his campaign website explains.

Kent has been very outspoken about his non-interventionist foreign policy beliefs, repeatedly asserting that Americans have been convinced to support wars based on lies.

“I realized that we had pretty much invaded Iraq on lies and we continued to double down on failure,” Kent previously told this reporter. “I realized there was no one behind the curtain at Oz and we were really just serving the political ruling class, and their hubris.”

Ultimately, his foreign policy beliefs led to him voting for Trump.

“Trump really refreshed me. I really liked the way he came in and was like ‘these wars are dumb, we have to crush ISIS and get the hell out of there,’” Kent said. “I was like, that’s the most complete thought I’ve heard on foreign policy in my entire time fighting these wars. So, Trump had me at that.”

Kent has said that Trump had tried to pull the troops out of Syria — and if he had been successful, his wife may still be alive today.

“We had reached our military objective. We had crushed the caliphate. My wife would be alive today, had the permanent ruling class not disobeyed President Trump,” Kent told this reporter. “Despite all the personal grief I was going through, it was the most traumatic thing I’ve ever had to do, it really clarified things for me that it is my duty to start speaking out on these issues.” 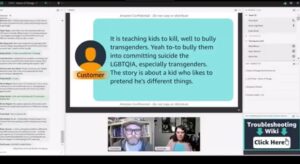