Multiple people were shot at the Fourth of July parade in Highland Park, Illinois, on Monday.

The suspect, Robert “Bobby” Crimo, 22, was taken into custody around 7 p.m. local time after a brief police chase.

This is the moment parade shooting suspect Bobby Crimo was taken into custody by police in Chicago’s northern suburbs. https://t.co/tvQ02c3mXC @WGNNews pic.twitter.com/TBNgaDlsyw

The shooting in Highland Park, which is approximately 25 miles north of Chicago, began minutes after the parade started at around 10 a.m. local time.

Sources told ABC 7 that “the person could be shooting from atop a high building.”

According to Cmdr. Chris O’Neill from the Highland Park Police, the suspect is “currently described as a male, white, approximately 18 to 20 years old, with longer black hair, a small build, and wearing a white or blue t-shirt.”

“We are assisting Highland Park Police with a shooting in the area of the Independence Day parade route. STAY OUT OF THE AREA – allow law-enforcement and first responders to do their work,” the Lake County Sheriff tweeted.

We are assisting Highland Park Police with a shooting in the area of the Independence Day parade route. STAY OUT OF THE AREA – allow law-enforcement and first responders to do their work. pic.twitter.com/PTut6CGZAe

Witness video shows people running as the gunfire rang out.

A reporter for the Sun-Times said that they personally witnessed blankets placed over “three bloodied bodies and five other people wounded and bloodied near the parade’s reviewing stand.”

#BREAKING: Illinois Governor Pritzker says info indicates at least 9 shot in Highland Park 4th of July parade shooting. Media reports at least 2 dead. Suspect is reportedly on the run and other festivities in surrounding city’s are being canceled.

“I heard 20 to 25 shots, which were in rapid succession. So it couldn’t have been just a handgun or a shotgun,” witness Miles Zaremski told the Sun-Times. He added that “people in that area that got shot,” including “a woman covered with blood . . . She did not survive.”

The reporter on the scene also noted that police were telling the crowd, “Everybody disperse, please. It is not safe to be here.”

Crimo was an aspiring rapper who used the stage name “Awake the Rapper.” Videos on his social media channels, which have since been removed, appeared to allude to his plans to commit a mass shooting.

Good to see Google’s content moderators and the FBI are all focused on the important threats like alphabet people getting their feelings hurt and parents mad at local school boards. https://t.co/bVZLOAVrjf pic.twitter.com/XVKa9GnWqX

Celebrations and festivities in surrounding areas were cancelled as a precaution, as the suspect had remained at large for approximately nine hours.

The nearby town of Evanston has also canceled its parade and fireworks.

This situation is ongoing and developing. Timcast will be updating as more information becomes available. 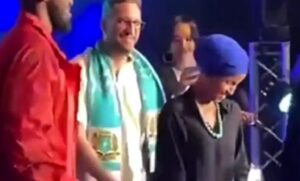