BREAKING: Democrat Congresswoman Carjacked at Gunpoint in Her Philadelphia District

The incident took place in her Philadelphia district as she was leaving a meeting at approximately 2:45 p.m.

According to a statement posted to her social media, Scanlan was physically unharmed during the incident.

Statement from the Office of Congresswoman Mary Gay Scanlon on today’s incident: pic.twitter.com/fomScnWUXo

“The Congresswoman was physically unharmed. She thanks the Philadelphia Police Department for their swift response, and appreciates the efforts of both the Sergeant at Arms in D.C. and her local police department for coordinating with Philly PD to ensure her continued safety,” the statement read.

Wishing my colleague and good friend @RepMGS the very best. She’s Philly tough so I know she will be ok!

Democrat Philadelphia Mayor Jim Kenney released a statement about the incident saying that the incident was “disheartening, and quite frankly infuriating.”

“Everyone deserves to feel safe in our city, and sadly, as we know, that hasn’t always been the case this year. It’s disheartening, and quite frankly infuriating, that criminals feel emboldened to commit such a reckless crime in the middle of the day in what should be a place of tranquility and peace — one of Philadelphia’s beautiful parks,” Kenney said in a statement to local station KYW-TV.

“I’m thankful that she was not physically harmed during this incident, and my thoughts are with her during what I’m sure is a traumatic time,” Kenney added. 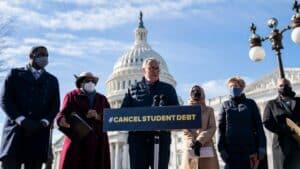 Pause on Student Loans Extended to May 1

11 responses to “BREAKING: Democrat Congresswoman Carjacked at Gunpoint in Her Philadelphia District”