After weeks of increasing sanctions on Russia, the US Government is poised to end all import of oil and gas

Bloomberg News reports that the Biden administration is set to impose a comprehensive ban on U.S. imports of Russian energy as soon as Tuesday. The move is poised to occur without the participation of its European allies.

According to Bloomberg, the ban will include Russian oil, liquefied natural gas, and coal.

The President is set to speak to the nation at 10:45 am EST to address potential sanctions.

On Monday, the White House said Biden had not yet decided whether to impose a ban on Russian energy. However, it was clear that the Biden administration considered doing so even if Europe did not impose a ban. Such a move would mark a departure from Biden’s strategy of setting sanctions in cooperation with European nations.

On Sunday, Secretary of State Antony Blinken said that he had spoken with Biden and other government officials about a potential U.S. ban.

“We are now talking to our European partners and allies to look in a coordinated way at the prospect of banning the import of Russian oil while making sure that there is still an appropriate supply of oil on world markets,” Blinken said during an interview with CNN’s “State of the Union.”

A ban on Russian oil and gas would increase energy prices for all Americans, and the White House has noted that risk as a reason Biden has not imposed one.

According to U.S. government data, about 8% of U.S. imports of crude oil and petroleum products came from Russia in 2021.

The White House has said that it will do everything possible to mitigate pain for U.S. consumers. However, Biden has repeatedly acknowledged that there will be costs for the U.S. economy and American households due to the war in Ukraine.

A ban on Russian oil imports would rock markets further, yet there are many legislative calls to take that step.

White House Press Secretary Jen Psaki said the White House was discussing the matter internally, but no decision had been made. 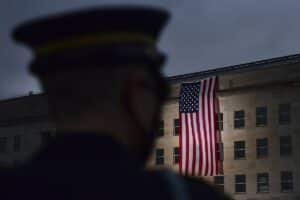 Poll Finds Republicans And Independents Would Stay and Fight if America Was Invaded, Democrats Say They Would Flee