An active shooter was in the loose in DC on Friday afternoon and posted a video of himself shooting indiscriminately to the anonymous imageboard 4chan.

At least four people, two adult females, one adult male, and one 12-year-old girl, have been shot. An additional victim, a female in her 60s, “suffered a graze wound to her back.”

7:54 pm Update: There are 4 total victims in this shooting incident. 2 adult females, 1 adult male, and a juvenile (12 year-old) female. The additional adult female victim is in her 60’s and suffered a graze wound to the back.

The poster was using the name “Raymond Spencer” on the 4chan post and referred to it as a school shooting.

The nearby University of D.C. Van Ness campus and the 6-12 grade Edmund Burke School were placed on lockdown after the shots were fired.

“Dear God please forgive me,” the poster wrote after uploading the video.

🚨#BREAKING: New video showing the POV of the ‘active shooter’

New video was posted on a website called 4chan reportedly showing the POV of the ‘active shooter’ incident filmed by the suspect showing themselves shooting indiscriminately. pic.twitter.com/TY2ERgag8l

Video was posted on a website called 4chan reportedly showing the POV of the ‘active shooter’ incident filmed by the suspect showing themselves shooting indiscriminately. Police are still asking… pic.twitter.com/jvHtun2lq2

“The location of this incident is 2900 block of Van Ness Street, NW. Police are in the area conducting active sweeps. Residents in the Cleveland Park and Van Ness area should shelter in place,” the DC Metropolitan Police tweeted.

Assistant Chief Stuart Emerman said during a press conference that the adults were in critical condition and the girl sustained “a minor gunshot wound.”

The victims were stabilized at nearby hospitals, according to a report from NBC News.

Residents were being told to shelter in place as police evacuated the apartment building where the shots were suspected to have been fired from.

Police were seen taking a man into custody near the scene around 5 p.m., but had not lifted the “active threat” warning as of 6 p.m. local time.

“Authorities were interviewing several witnesses but had no one in custody, they said about 5:40 p.m. Friday. Officers were seen escorting a man in handcuffs about an hour earlier, but an assistant police chief later said no one was in custody,” NBC Washington reports.

Emerman said that he had been detained for questioning because he was seen fleeing the scene.

“At this point we do not have any suspects in custody,” he said. “We are interviewing several witnesses. As would naturally happen during an incident like this, several individuals ran from the area, so we did stop several individuals to conduct witness investigations with them.”

“If they are not linked to the incident, yes, they will be released,” Emerman said.

WATCH: Here’s the moment police led a man away from the Northwest D.C. shooting scene in handcuffs.

It is unclear if he is who D.C. Police have identified as the alleged shooter. The scene is still labeled as an “active threat”https://t.co/5NdcxQGzqw pic.twitter.com/Gl8iznKcnj

VAN NESS SHOOTING: Two adults and a girl have been shot in Northwest D.C., police say. A swarm of officers in tactical gear, some with guns drawn, were seen running along Connecticut Avenue NW. https://t.co/VMDogp3l2Y pic.twitter.com/owMRxjTK2d

UPDATE (7:56 p.m.): Police are seeking 23-year-old Raymond Spencer of Fairfax, VA as a person of interest in the shooting.

🚨MPD is seeking the below person of interest in connection to the shooting in the 2900 block of Van Ness Street, NW. This individual is 23 year-old Raymond Spencer of Fairfax, Virginia. 🚨 pic.twitter.com/ziR0Vutw0p

UPDATE (10:00 p.m.): The suspect was found deceased and the DC Police announced that the shelter in place order was lifted at 9:47 p.m.

The suspect has been located deceased inside of a residence in the area of Conn Ave and Van Ness St, NW.

The shelter in place has now ended.

This is an ongoing incident and Timcast will be providing updates as the situation unfolds. 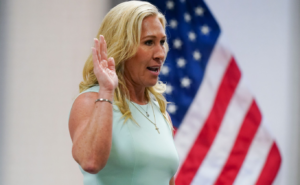