Boy Arrested in India for Beheading Sister with Mother's Assistance

The victim was reportedly two months pregnant at the time

A young male has been arrested in India for beheading his 19-year-old sister while his mother allegedly held the young woman’s legs.

The account of the crime was shared with media by local police who have handled the case.

The victim, Kirti Avinash Thore, was two months pregnant at the time and married against her parents’ wishes, — an act of rebellion in traditional Indian culture. This was the account of motive given by the victim’s husband, according to local authorities.

The murder occurred on Sunday in Vaijapur, Maharashtra. The Indian Express reported that the accused perpetrators — Sanket Mote and his mother, Shobhabai Mote — are residents of the village.

“The 19 year old girl went against her parents’ wishes and got married five months ago. They had a court marriage and since then she had not been in contact with her family and was living with her husband,” Kailash Prajapati, a senior police official in Vaijapur, Maharashtra, told the media.

According to the report, the victim’s mother and brother came to her home on Sunday, and the victim invited them inside for tea.

“That is when the brother took a scythe and struck her four times and beheaded her. They then picked up the head and kept it outside the house in the yard and left the body inside,” Prajapati said.

“The mother was holding her legs during the incident and was equally complicit,” he added.

The victim’s husband, who was home sick at the time, was reportedly asleep. He woke up when the incident and was subsequently attacked before he escaped.

Police said the mother and son later visited a police station and confessed to the killing. Police launched an investigation after discovering the victim’s body and head at her home.

While the boy, a minor, and his mother have not been officially charged, police listed murder as the charge for both prior to conducting an official investigation.

Currently, the local police are awaiting a postmortem to confirm if the victim was pregnant. 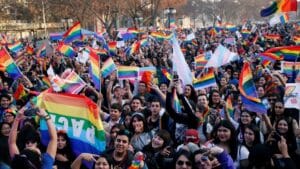