A hospital in Boston, Massachusetts abruptly blocked a patient from receiving a potential heart transplant this week because of his refusal to receive a COVID vaccine.

The hospital claims the regulations are consistent with other health care systems across the country.

“David Ferguson is speaking out passionately on behalf of his son DJ. He says the 31-year-old is fighting for his life at Brigham and Women’s Hospital and in desperate need of a heart transplant,” reports CBS News Boston. “The family says he was at the front of the line to receive a transplant but because he has not received the COVID-19 vaccination he is no longer eligible according to hospital policy. And Ferguson says his son refuses to get the shot.”

“My son has gone to the edge of death to stick to his guns and he’s been pushed to the limit,” said the patient’s father.

“It’s kind of against his basic principles, he doesn’t believe in it. It’s a policy they are enforcing and so because he won’t get the shot, they took him off the list of a heart transplant,” Ferguson added.

The hospital released a statement explaining the decision, writing “And like many other transplant programs in the United States – the COVID-19 vaccine is one of several vaccines and lifestyle behaviors required for transplant candidates in the Mass General Brigham system in order to create both the best chance for a successful operation and also the patient’s survival after transplantation.”

“Post any transplant, kidney, heart whatever, your immune system is shut off,” explained Dr. Arthur Caplan, head of Medical Ethics at NYU Grossman School of Medicine. “The flu could kill you, a cold could kill you, COVID could kill you. The organs are scarce, we are not going to distribute them to someone who has a poor chance of living when others who are vaccinated have a better chance post-surgery of surviving.” 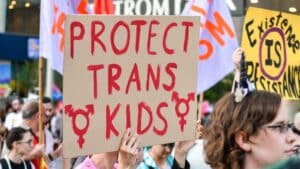