Boebert: Speaker Negotiations Began During Summer 2022, But Were 'Dismissed'

The U.S. House of Representatives has now gone three days and eleven separate votes without electing a Speaker, as 20 Republican holdouts have not selected Rep. Kevin McCarthy, who needs nearly 100 percent GOP support with the Party’s slim majority.

Critics of those who have thus far withheld support for McCarthy have grown more vocal in their anger, with many saying that the opposition to a McCarthy Speakership should have been more prepared before legislators met to begin the latest session of congress.

However, according to Rep. Lauren Boebert (R-Colo.), preparations were made during the middle of 2022.

“This started in the summer. We wanted to handle this privately and have a solution before Jan. 3,” Boebert told author, speaker, and media host Michael Knowles.

“These negotiations began in the summer and they were dismissed because Kevin McCarthy thought he was going to have this massive red wave and our votes did not matter,” she said. “When he saw that the $300 million that he raised did not produce the red wave that he promised, he realized quickly he’s going to need our votes. And so some concessions were put into play.”

Boebert says that on Jan. 2, the day before the first vote, she and Reps. Matt Gaetz and Scott Perry went into McCarthy’s office and were able to secure the 218 votes needed to elect McCarthy as Speaker after gaining the support of other members who had negotiated specific requests.

Members wanted assurances on an array of issues, including a “motion to vacate,” which allows a majority of representatives to vote to remove a Speaker and elect a new Speaker.

This is something Thomas Jefferson wrote and has been in effect for nearly two centuries. And Nancy Pelosi was the first Speaker in history to modify that. She removed that individual empowerment from the member and said, ‘You no longer have a say in this. I get to rule how I want. And you don’t have a check. You don’t have a balance.’

Kevin McCarthy wanted to leave that as Nancy Pelosi had it, there were concessions. He got down to 50, got down to 20, got down to five. No. Thomas Jefferson wrote it as one member. Any one member can bring that motion to vacate the chair forward. And that is our accountability. This is something that was my red line.

Boebert says they have offered a “menu of other candidates” including Rep. Byron Donalds and Rep. Jim Banks.

“This is not a kingdom that we live in. We don’t anoint a king. I believe that this is how our founding fathers intended this process to work,” she said. “Our vote is there to be debated, not just rubber stamped and cast to the biggest fundraiser.” 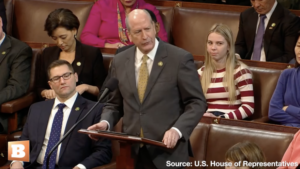 'He Ain't No Prop': Cori Bush Slammed For 'Racist' Comments