Blockade Continues at Ambassador Bridge Despite Threats of Force and Arrests

Despite a court order to end the protest and declaring a state of emergency in Ontario, police failed to disband the crowd

A standoff between Canadian police and protesters opposing COVID-19 mandates continued Sunday, as a court order and threats of arrest have failed to end the Freedom Convoy protests.

Since last Monday, protesters in multiple vehicles have blocked the bridge in both directions. They have created a halt in the supply chain for Detroit’s carmakers.

Despite a court order to end the protest and declaring a state of emergency in Ontario, police failed to disband the crowd and resume usual cross-border traffic.

Police moved in early on Saturday to try and disband protestors. The police managed to push protesters back from the foot of the bridge. However, more protestors poured into the area during the afternoon, and the police effort appeared to have stalled.

Concrete barricades were set up on Saturday in front of the bridge to keep protesters from reclaiming any ground.

“I am very hopeful still that police can … try and get to these folks in a reasonable way and have them understand that it’s time to move on,” Windsor Mayor Drew Dilkens told CBC News.

“We can no longer afford as a country to keep it closed,” said Dilkens.

The Ambassador Bridge carries roughly $360 million a day in cross-border cargo. The cargo represents about 25% of all U.S.-Canada trades.

The Freedom Convoy protest started in Ottawa by Canadian truckers opposing a vaccinate-or-quarantine mandate for cross-border drivers. It has now entered its 17th day of active protest.

The protest has grown beyond just a statement against the cross-border vaccine or quarantine mandate. The protestors are now calling for a change to carbon tax and other issues. The protest has even expanded to include people joining with cars, pick-up trucks, and farm vehicles.

Other protests expanded across Canada on Saturday. Estimates say about 4,000 people are protesting in downtown Ottawa. Toronto had about 1,000 protestors on Saturday. Protesters blocked intersections along the Pacific Highway with vehicles leading to the Canada-U.S. border crossing in South Surrey, British Columbia.

Protests have extended to three border points, including Ontario, Alberta, and Manitoba. 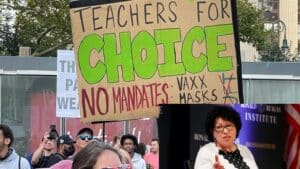