Black Woman Pretended to be KKK Member and Threatened Neighbors

A black woman in Georgia threatened to burn down her neighbors’ homes and kill them while pretending to be a white man in the Klu Klux Klan.

Residents of the Brookmont subdivision went to the authorities after finding a series of racially charged notes left in several mailboxes over the course of about nine months.

Terresha Lucas, 30, was charged with eight counts of making terroristic threats by the Douglasville Police Department. She allegedly described herself as a six-foot-tall white male with a long, red beard who did not live in the neighborhood.

The first notes were discovered by two different households on Dec. 21. Similarly, threatening notes were found in mailboxes on Feb. 17, Feb. 22, Mar. 1 and Mar. 3. The final note was left on Sept. 6. Police believe additional notes were dispersed as well.

Detectives Nathan Shumaker and Andre Futch were assigned to look into the case, which slowed in the middle of March. They determined the letters had “similar handwriting, tone and verbiage with some distinctive letters that were consistent throughout,” according to a statement from the police department. As part of their investigation, the officers went door-to-door to check doorbell cameras and passed out flyers while patrolling the neighborhood.

“Our investigators had the drive to stick with this case and see it all to the end,” said Police Chief Gary Sparks. “That’s what we’re all about and this reflects the professionalism and integrity of the department.”

In September, additional evidence was uncovered that linked Lucas’s house to the letters. After obtaining a search warrant, the detective found more evidence linking Lucas to the case.

“The notes were received by at least 7 Blacks who lived in the neighborhood and that the notes contained the N-word and talked about hanging people and killing kids” per CBS46.

“It is not clear if Lucas has retained an attorney,” says Media Entertainment Arts WorldWide. “The Douglas County Sheriff’s Office posted records that show Lucas was booked into jail. The woman faces eight felony charges of terroristic threats and acts, each of which carries a fine of $5,000 and a prison sentence of maximum five years.”

A motive for the crimes has not been publically disclosed. 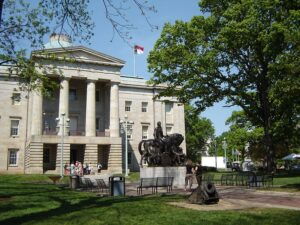