On Monday, Billie Eilish announced her partnership with HeadCount, a nonprofit organization dedicated to encouraging civic action through music and culture.

Fans from the US can enter to win a VIP trip to their idol’s ‘Happier Than Ever’ tour dates in Australia and New Zealand along with a bundle of merch signed by Billie. All participants need to do to enter is check their voter registration status, register to vote through HeadCount’s online portal, or sign up to receive information and alerts on upcoming elections.

Billie joined HeadCount’s ‘Good To Vote’ initiative to encourage her young audience to become politically active ahead of the upcoming midterm elections.

“I’m working with HeadCount to encourage everyone to show up at the polls and use their voice during these midterm elections,” said Eilish in an official statement. “With what is going on in our country, we need to get out to the polls and vote for what we believe in. Not showing up is not an option.”

Billie is joining the ranks of other clouted performers such as Ariana Grande, Brendon Urie, Beyonce, and Ed Sheeran who have collaborated with HeadCount and its parent organization, Global Citizen.

Global Citizen is an NGO that purports to be on a mission to end extreme poverty by 2030. The group’s official website states their goals to defeat poverty, create a “green future for all,” and demand equity.

This isn’t the first time Billie has collaborated with HeadCount. In October 2020, she posted a video on Twitter calling on her newly-18-year-old fans to register to vote. She seemed reluctant to speak out on politics at the time, saying, “As much as I don’t want to be involved in this f—ing s—, as in politics…I think it is incredibly important that we involve ourselves.”

“You gotta vote, there’s no excuse at this point,” she implored her young supporters.

Global Citizen’s promoted Billie’s newest partnership with HeadCount, blithely addressing the 20-year-old’s fanbase as “US Global Citizens.” With all the enthusiasm of a kindergarten teacher, the organization tweeted, “Would going to Australia & New Zealand to see @billieeilish make you happier than ever?! Check your voter registration with @HeadCountOrg, and you can enter to win a trip for two plus a signed merch bundle!!”

Ironically, American fans of the pop star need to be rewarded for participation in their democracy with a luxury stay in two countries on the other side of the planet.

Billie has volunteered a face for a faceless organization that is courting the influence she has over her fanbase, a significant portion of whom are below voting age. Those who do qualify to enter are likely only interested in the initiative on the off chance they get to see her.

Because of the singer’s clear distaste for getting involved in political activism back in 2020, this arrangement comes across as strange and inauthentic. Sadly, whether or not celebrities feel personally convicted about participation in our political system, public relations teams find activism to be a shrewd business opportunity for their clients.

Billie Eilish has artificially adopted all the appearances of a subversive ‘bad influence’ in art by covering herself in spiders, crying black tears, and choosing edgy song titles like ‘all the good girls go to hell.’ However, she’s now shown the public that she is happy to use her fame to assist the objectives of a web of shadowy NGOs and philanthropists. 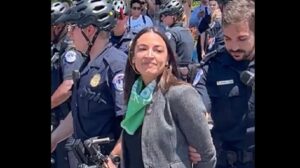