‘Businesses that prioritize diversity in their workforce and leadership experience more financial success,’ the companies wrote

Major tech companies have submitted a brief to the U.S. Supreme Court in support of the race-conscious affirmative action programs the court will consider in  its upcoming session this fall.

Apple, Microsoft, General Electric, and other major tech companies submitted amici curiae briefs to the Supreme Court in support of the respondents, Harvard University and the University of North Carolina, to a petition from Students for Fair Admissions which argues Asian American applicants are illegally disadvantaged by affirmative action programs that weigh an applicant’s race as a factor of admissions.

The companies, which include financial services like Mastercard and technology giants like Google, submitted their views to the court in two separate briefs. The tech companies claim that in order to serve a diverse consumer base, they need a diverse labor pool. And that while major U.S. businesses have invested heavily in “diversity, equity, and inclusion initiatives,” they still rely on universities to act as a “pipeline of diverse leaders.”

All told, over 80 corporations have expressed their financial interests at stake. “Prohibiting universities nationwide from considering race among other factors in composing student bodies would undermine businesses’ efforts to build diverse workforces,” they said.

In a section explaining their rationale for investing heavily in diversity, the undersigned companies said they “know to be true from experience that businesses that prioritize diversity in their workforce and leadership experience more financial success.” According to Meta, Facebook’s parent company, and the other companies named in the briefs, there is also a positive association between workforce diversity and shareholder value.

While tech companies are decidedly in the corner of affirmative action, the court has received a large number of briefs filed in support of the petitioners. One brief, which was submitted by the attorney general for the state of Oklahoma, bears the signatures from 17 other states that have all signed on in support of ending race-based admissions programs.

The signatories to Oklahoma’s brief agree. “An Asian student in the bottom half of applicants for academics has a barely 2% chance of admission,” the brief argues before adding that African American applicants of similar academic standing have a 25% chance. “That African-Americans with below median academics are more likely to be admitted than the highest-achieving Asian-Americans belies Harvard’s repeated assertion that race benefits only ‘highly qualified candidates.'”

The court first agreed to hear the cases back in January, merging the lawsuits against Harvard and UNC. Last week, however, the court decided to split the cases once again but did not comment on this reversal. Commentators speculate that the court acted in order to allow newly-minted Justice Ketanji Brown Jackson to participate. Jackson had previously pledged to recuse herself from the affirmative action case due to her former membership on Harvard’s Board of Overseers. With the cases split once more, Jackson will be able to weigh in on the issue as it unfolds in the UNC case. 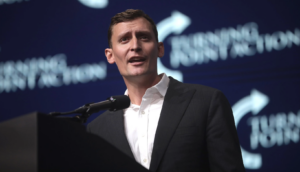