President Biden plans to propose a 20% minimum tax on households worth more than $100 million.

According to a report by the Washington Post, the White House will unveil a new minimum tax intended for billionaires as part of its 2023 budget.

Most of America’s ultrawealthy citizens pay far lower tax rates than middle-class Americans. This is due to the fact that the federal government does not tax the rising value of their stock holdings until those assets are sold.

Billionaires are able to borrow against their calculated gains without triggering capital gains tax events. This allows them to avoid taxes on large portions of their wealth, utilize borrowed money for living expenses, and avoid taking a traditional salary.

Last year, the White House Office of Management and Budget and Council of Economic Advisers estimated 400 American billionaire families paid an average federal tax rate of just over 8% between 2010 and 2018.

The average American paid about 24% of their income in taxes during the same period. The average middle-class American makes up about 97% of the United States annual tax revenue.

The White House plan would require the ultrawealthy to pay a tax rate of at least 20% on their entire income. The plan outlines the income as the combination of traditional wage income and unrealized gains, such as higher stock prices.

Documents obtained by The Washington Post state, “The Billionaire Minimum Income Tax will ensure that the very wealthiest Americans pay a tax rate of at least 20 percent on their full income.”

According to the documents, White House officials estimate the tax would raise roughly $360 billion in new revenue over the next ten years if the legislation is passed.

However, treating unrealized gains as income may be unfair and could lead to unintentional outcomes.

If billionaires are forced to pay taxes on the rising values of their stocks and investments for selling them at a profit, many could be pushed to sell off controlling interest in companies they founded to pay their tax bills.

Unrealized gains of shareholders in private companies, not traded in open markets, would be difficult for the government to price, making it hard to legally and adequately tax the assets.

Both chambers will need to approve the proposed budget and tax laws. It has yet to be seen if there will be support or opposition from the House or the Senate. 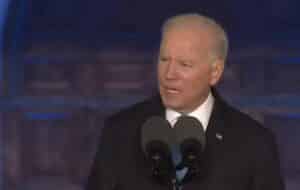 Biden Calls for Regime Change in Russia, Then White House Claims He Didn't Mean What He Said — Again