According to multiple media outlets, President Biden will announce his Supreme Court nominee on Friday.

The apparent front runner for the nomination is Ketanji Brown Jackson, 51, who currently sits on the U.S. Court of Appeals for the District of Columbia.

The exact timing of Friday’s announcement remains unknown as the Russian invasion of Ukraine continues to be the focus of the White House.

However, a Friday announcement would mark the second anniversary of the day when Biden publicly pledged to appoint the first African American female justice during one of his 2020 primary debates in South Carolina.

It is unclear if the President has taken the critical step of formally offering the lifetime position to his nominee. If he has made a decision, this is a move that would have taken place Thursday evening or Friday morning just prior to the announcement.

Vice President Kamala Harris delayed a trip to Louisiana Friday, giving rise to the belief that an announcement was coming. White House press secretary Jen Psaki told reporters on Wednesday that Biden would not hold his announcement until after February — indicating that the crisis in Ukraine hasn’t deterred the administration’s objectives.

Sources have reported this week that Biden has met with at least three potential nominees: Jackson; Leondra Kruger, of the California Supreme Court; and J. Michelle Childs, of the U.S. District Court for the District of South Carolina.

On Thursday, a federal court increased the speculation that Jackson was the forthcoming nominee.

The U.S. Court of Appeals for the DC Circuit shifted from its usual procedure by issuing an opinion on a Thursday. The court’s normal schedule is to release opinions on Tuesday and Friday. Notably, Jackson was in the majority on the case outlined in the opinion.

Some experts, anticipating the President’s announcement, assumed the release was a sign that Jackson might be the nominee, especially because a similar scenario happened before the nomination of Justice Brett Kavanaugh. 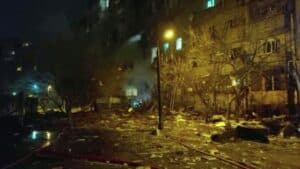