President Joe Biden has invoked the Defense Production Act to address the nationwide shortage of baby formula, he announced on Wednesday.

The shortage came amid a supply chain crisis and the temporary closure of Abbott Laboratories’ facility in Sturgis, Michigan — where Similac products are produced.

The empty formula aisle at Target.

We live in a country where there is no food for babies. pic.twitter.com/YqGb7ceeQ2

“I’m taking two new steps to increase baby formula supply,” Biden tweeted. First, he said that he was invoking the Defense Production Act to increase domestic production. Second, he announced an effort dubbed “Operation Fly Formula” to use federal planes to fly formula in from abroad.

“We’re making sure safe formula gets to all who need it,” the tweet added.

The tweet also included a video of Biden discussing the issue.

We’re making sure safe formula gets to all who need it. pic.twitter.com/lnkxsaCY6T

A memorandum for the Secretary of Health and Human Services from the White House on Wednesday evening stated, “on February 17, 2022, the largest infant formula manufacturer in the country — Abbott Nutrition — initiated a voluntary recall of several lines of powdered infant formula made at its Sturgis, Michigan facility, following concerns about bacterial contamination at the facility after four infants fell ill. This incident has combined with supply chain stress associated with effects of the coronavirus 2019 (COVID-19) pandemic to cause an acute disruption in the supply of infant formula in the United States.”

The White House concluded that, “the Secretary of Health and Human Services may use the authority under section 101 of the Act to determine, in consultation with the Secretary of Agriculture and the heads of other executive departments and agencies as appropriate, the proper nationwide priorities and allocation of all ingredients necessary to manufacture infant formula, including controlling the distribution of such materials (including applicable services) in the civilian market, for responding to the shortage of infant formula within the United States.”

The Abbott facility is expected to resume operations within the next two weeks. 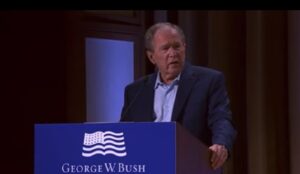 George Bush Draws Laughs From the Crowd After Condemning Putin for ‘Brutal Invasion of Iraq. I Mean, of Ukraine’