President Joe Biden took to Twitter to criticize a Florida bill that would limit the discussion of “gender identity” and sexual orientation in schools on Wednesday.

The White House claims that the bill is a “hateful attack” on gay children.

“I want every member of the LGBTQI+ community — especially the kids who will be impacted by this hateful bill — to know that you are loved and accepted just as you are,” the president tweeted. “I have your back, and my Administration will continue to fight for the protections and safety you deserve.”

The president was adding to a tweet from the official White House account that called the bill an “attack” on gay children.

The bill in question, SB 1834, has been approved by the Senate Education Committee in Florida. Opponents of the legislation have branded it the “Don’t Say Gay” bill.

According to the text of the bill, schools “may not encourage discussion about sexual orientation or gender identity in primary grade levels or in a manner that is not age-appropriate or developmentally appropriate for students.” If a parent believes a school district has violated the policy, they will be permitted to take legal action.

Republican State Sen. Dennis Baxley, the bill’s sponsor, maintains that some conversations are meant to be had with parents — not teachers or school staff.

“Some discussions are for (having) with your parents,” Baxley said, according to a report from Fox 13. “And I think when you start having sexual-type discussions with children, you’re entering a very dangerous zone. Your awareness should pop up right away, this isn’t teaching.”

While Florida Governor Ron DeSantis has not expressly stated that he will sign the bill if it makes its way to his desk, he has signaled his support for it.

Speaking at a press conference on Tuesday, DeSantis said “one of the things that I think the legislature is getting at is everything should be age-appropriate.”

“You have politicians saying parents have no role in the education of their kids. Give me a break,” he said. “We want parents to be able to have access to what’s going on in the classroom. And certainly, it is inappropriate to be hiding these things from parents.”

“We’ve seen instances of students being told by different folks in school, ‘Oh, well, don’t worry, don’t pick your gender yet, do all this other stuff.’ They won’t tell the parents about these discussions that are happening. That is entirely inappropriate,” DeSantis continued. 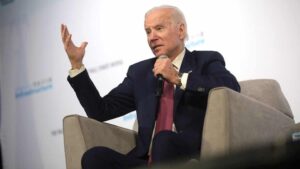 President Biden’s Approval Rating Falls Below 40%, According to New Poll