The move 'does nothing to show that the administration takes high energy prices seriously,' says the Western Energy Alliance

On Friday, the Biden Administration announced a revised plan to reduce the land available for oil and gas by about 80% while raising royalty rates for the land amidst rising energy costs.

The Department of Interior (DOI) announced Friday its efforts to reform the federal oil and gas leasing program. The move significantly reduced the amount of land available for drillers.

The Bureau of Land Management (BLM) will proceed with operating oil and gas drilling lease sales on roughly 144,000 acres of federal lands. According to the DOI, this reduction of 80% is a significant change in the amount previously designated.

The administration hasn’t conducted an onshore lease sale since taking office in January 2021. They have delayed the program on numerous occasions.

“How we manage our public lands and waters says everything about what we value as a nation,” Interior Secretary Deb Haaland said. “For too long, the federal oil and gas leasing programs have prioritized the wants of extractive industries above local communities, the natural environment, the impact on our air and water, the needs of Tribal Nations, and, moreover, other uses of our shared public lands.”

“Today, we begin to reset how and what we consider to be the highest and best use of Americans’ resources for the benefit of all current and future generations,” Haaland continued.

The DOI will also increase royalty rates for drillers from 12.50% to 18.75%, a move the DOI called the “first-ever increase in the royalty rate for new competitive leases.”

Some oil and gas experts spoke out in concern over the administration’s announcement.

Western Energy Alliance President Kathleen Sgamma said, “While we’re glad to see BLM is finally going to announce a sale, the extreme reduction of acreage by 80%, after a year and a quarter without a single sale, is unwarranted and does nothing to show that the administration takes high energy prices seriously.”

“This administration has decided to make leasing and production a political football, and Americans are paying the price at the pump,” she continued.

President Joe Biden issued a moratorium on the entire leasing program after taking office in 2021. However, in June, a federal judge blocked the moratorium on June 15, 2021, ruling that Biden had exceeded his authority.

According to the Independent Petroleum Association of America, there has been no onshore lease sale under Biden, the first time no lease sale has been executed in a calendar year since the DOI began recording the data in 1998. 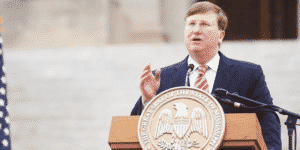