The United States federal government purchased 600,000 doses of a new monoclonal antibodies after treatment options decreased following the rise of the Omicron variant of COVID-19.

The treatment from pharmaceutical company Eli Lilly has not yet been approved by the Food and Drug Administration. If the FDA signs off on the company’s emergency use authorization application, the antibodies could be shipped for free.

“We are going to try to be there to meet the demand,” Health and Human Services Secretary Xavier Becerra said in his announcement on Feb. 10.

The drug from Lilly, known as bebtelovimab, has proven to be effective against Omicron, which is currently the most prominent strain of the coronavirus in America. The company says bebtelovimab is effective for the treatment of mild-to-moderate cases of COVID-19.

“To date, over 700,000 patients have been treated with Lilly’s monoclonal antibodies in the U.S., potentially preventing more than 35,000 hospitalizations and at least 14,000 deaths during the worst of the pandemic,” said Eli Lilly in a press release.

Two other monoclonal antibody treatments were found to be ineffective against the variant in December of 2021.

In January, the FDA revoked its approval for monoclonal antibody treatments from Eli Lilly and Regeneron. The agency said at the time it would reapprove the treatments if the companies could prove they were effective against other variants in the future. By revoking its approval, the FDA said it was aiming to limit unnecessary side effects of the treatments, including allergic reactions.

Today, the FDA revised the authorizations for two monoclonal antibody treatments to limit their use to only when the patient is likely to have been infected with or exposed to a variant that is susceptible to these treatments. https://t.co/mZS55mEpf5 pic.twitter.com/Qi9S5P4ZgB

Florida Governor Ron DeSantis denounced the agency’s decision. He said the FDA was relying on “a single, non-peer-reviewed, non-clinical study that was actually done by a consultant for a rival company to the other two monoclonal antibody treatments. … It’s really a reckless decision to be able to take this option away from patients.”

“Thousands of Floridians woke up to news that their appointments to get treatment for COVID-19 infection were canceled by the administration, which revoked — outright revoked — authorization for two very popular monoclonal antibody treatments that the state of Florida really pioneered over the summer,” DeSantis said at a news conference on Jan. 25.

“These treatments, the ones that they are fighting over, that the governor’s fighting over, do not work against Omicron, and they have side effects,” she said. “That is what the scientists are saying.”

“Laboratory-made monoclonal antibodies stand in for the human body’s immune system by acting to block an invading virus,” reports AP News. “Delivered intravenously or by injection, the medicines are meant to be administered early in an infection to forestall severe disease and death.”

Lilly reported in a statement that its federal contract is worth $720 million. The company has agreed to deliver the dose by March 31. There is also an option to deliver an additional 500,000 doses by July 31. 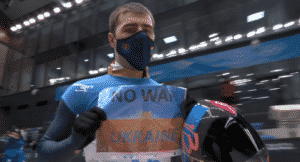