‘As of this moment, I am convinced [Putin’s] made the decision,’ Biden said

On Friday, President Joe Biden spoke from the White House on the latest developments in the crisis between Russia and Ukraine.

The President last spoke about the crisis on Thursday as he departed the White House for a trip to Ohio when he said there is “every indication” a Russian invasion of Ukraine “will happen in the next several days.”

Biden’s address comes amid escalating tensions as U.S. Ambassador to the Organization for Security and Cooperation in Europe, Michael Carpenter, warned Friday that the U.S. has evaluated a continued and significant Russian military buildup near Ukraine.

Before his remarks, Biden spoke with allies in North America and Europe. He is set to hold a phone call with the leaders of Canada, France, Germany, Italy, Poland, Romania, the United Kingdom, the European Union, and NATO to discuss the ongoing crisis.

During the address on Friday, Biden said he’s “seen reports of a major uptick in violations of the ceasefire by Russian-backed fighters attempting to provoke Ukraine in the Donbas.”

“For example, a shelling of a Ukrainian kindergarten yesterday which Russia has falsely asserted was carried out by Ukraine. We also continue to see more and more disinformation being pushed out to the Russian public, including Russian-backed separatists, claiming that Ukraine is planning to launch a massive offensive attack in the Donbas,” Biden said. “Look, there is no evidence [of] these assertions, and it defies basic logic to believe the Ukrainians would choose this moment, with well over 150,000 troops arrayed on its borders, to escalate a year-long conflict.”

“As of this moment, I am convinced he’s made the decision,” Biden said. 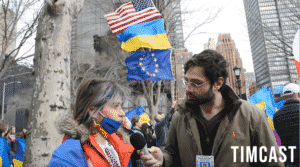