The nude baby from Nirvana’s infamous Nevermind album cover is all grown up — and suing the band for “child pornography.”

Spencer Elden filed the lawsuit on Tuesday — despite recreating the album cover on Nevermind’s 10th, 17th, 20th, and 25th anniversaries. He also has the name tattooed across his chest.

Elden is seeking at least $150,000 from 17 different people and entities including Dave Grohl and Krist Novoselic; Courtney Love, the executor of Kurt Cobain’s estate; Guy Oseary and Heather Parry, managers of Cobain’s estate; photographer Kirk Weddle; art director Robert Fisher; and all of the record companies that have released the album with the cover art.

Typically, non-sexual nude photos of infants do not fall under child pornography laws, but Robert Y. Lewis, Elden’s lawyer, argued that the image was in fact sexualizing the baby.

“Defendants intentionally commercially marketed Spencer’s child pornography and leveraged the shocking nature of his image to promote themselves and their music at his expense,” reads the lawsuit, filed in the U.S. District Court’s central district of California and obtained by Variety. “Defendants used child pornography depicting Spencer as an essential element of a record promotion scheme commonly utilized in the music industry to get attention, wherein album covers posed children in a sexually provocative manner to gain notoriety, drive sales, and garner media attention, and critical reviews.”

Elden says that he was never compensated for the photo, beyond his parents being paid $200 at the time that it was taken. The lawsuit claims that they never even signed a release authorizing use of the image.

“Neither Spencer nor his legal guardians ever signed a release authorizing the use of any images of Spencer or of his likeness, and certainly not of commercial child pornography depicting him,” reads the suit.

Spencer has recreated the image multiple times over the years, most recently in 2016. At the time that he did it, he told the New York Post that “the anniversary means something to me. It’s strange that I did this for five minutes when I was 4 months old and it became this really iconic image. …. It’s cool but weird to be part of something so important that I don’t even remember.”

“I said to the photographer, ‘Let’s do it naked.’ But he thought that would be weird, so I wore my swim shorts,” Elden told the Post.

spencer elden has fucking double standards… you’re suing them after doing this?? https://t.co/nfbPJ7WyRi

Variety reports that in 2008, Spencer’s father, Rick, discussed how the photo happened with NPR. He explained that his friend Weddle, the photographer, “calls us up and was like, ‘Hey Rick, wanna make 200 bucks and throw your kid in the drink?’ I was like, ‘What’s up?’ And he’s like, ‘Well, I’m shooting kids all this week, why don’t you meet me at the Rose Bowl (Aquatic Center), throw your kid in the drink?’ And we just had a big party at the pool, and no one had any idea what was going on!”

The family didn’t think about the photo again after the shoot until seeing it splashed across the album cover. Geffen later sent Elden a platinum album and a teddy bear.

While the image has typically been accepted to be commentary on capitalism, the lawsuit says that Nirvana front man Kurt Cobain, who is not alive to defend himself, “chose the image depicting Spencer — like a sex worker — grabbing for a dollar bill.”

“Weddle took a series of sexually graphic nude photographs of Spencer. To ensure the album cover would trigger a visceral sexual response from the viewer, Weddle activated Spencer’s ‘gag reflex’ before throwing him underwater in poses highlighting and emphasizing Spencer’s exposed genitals. Fisher purchased fishhooks from a bait and tackle shop to add to the scene. At least one or more film cartridges were exposed in a short period of time which included at least 40 or 50 different image shots of Spencer. Cobain chose the image depicting Spencer — like a sex worker — grabbing for a dollar bill that is positioned dangling from a fishhook in front of his nude body with his penis explicitly displayed.”

Cobain was reportedly so adamant about using the photo that when the label suggested a different image, the singer said that the only change he was willing to make would be covering the penis with a sticker that read “If you’re offended by this, you must be a closet pedophile.”

Over the years, Elden has repeatedly expressed frustration that he has never met anyone from Nirvana, despite reaching out to them multiple times.

“It’s hard not to get upset when you hear how much money was involved… [When] I go to a baseball game and think about it: ‘Man, everybody at this baseball game has probably seen my little baby penis,’ I feel like I got part of my human rights revoked,” Elden told Time Magazine in 2016.

Nobody who is named in the lawsuit had publicly commented by Wednesday morning. 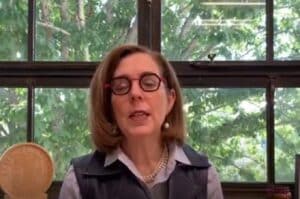