The film’s director has called the festival’s creator, Travis Scott, a ‘criminal’

A documentary about Travis Scott’s deadly Astroworld Festival will be released despite concerns from attorneys involved in lawsuits stemming from the event.

Concert Crush: The Travis Scott Festival Tragedy will be released on April 29. The film was directed by Charlie Minn, who has told reporters the depiction of Astroworld and its creators is fair and balanced.

“My job is to make the most truthful, honest, sincere documentary from the victim’s point of view,” Minn told AP News. “We need to know about these stories to prevent it from happening again.”

The film features interviews of people who attended the event as well as cellphone footage of the November concert.

The Houston-based festival resulted in ten fatalities after a massive crowd surged. The youngest victim was 9-years-old. Hundreds of people were injured as a result of the chaotic event.

Scott and the events promoter LiveNation are facing approximately 5,000 lawsuits for their roles in the injuries and deaths that occurred at the 2021 festival. District Court Judge Kristen Hawkins, who is handling the consolidated case, issued a gag order, barring any party involved from discussing the proceedings with the media.

Lawyers for LiveNation have argued the documentary could “taint the jury pool” and thereby prevent their client from receiving a fair trial. The legal team has also argued that it is a violation of the gag order as “an attorney who filed lawsuits related to the tragedy also co-produced the documentary,” per The Hollywood Reporter.

Bob Hilliard, a lawyer representing the family of the 9-year-old who died as a result of being trampled at Astroworld, previously accused Scott of violating the gag order. In March, the rapper promoted his “Project H.E.AL. group” initiative on his Instagram account. Hillard said this was an example of the musician using his platform to sway public opinion.

The rapper faced immediate condemnation online for continuing to perform for 30 minutes despite calls for help from the crowd. In his first interview following the November tragedy, Scott told Charlamagne tha God he did not hear the crowd’s cries and was not aware of the dangerous conditions until he left the stage.

He also said that he was being painted as the responsible party because of his celebrity status.

“I’m the face of the festival,” the musician said. “I’m the artist. So yeah, the media wants to put it on me.”

“We trusted the professionals that people be taken care of and, you know, leaving safely,” he said.

Scott has been convicted twice before for encouraging reckless and dangerous behavior at his shows. He has been known to tell his fans to rush the stage, creating unsafe conditions at his performances.

Although he has described the film as fair, Minn has condemned Scott while speaking with the media.

“In my opinion, he is a criminal. How do we get around that?” the director told Page Six. “The reason he deserves criticism and jail time, he knew there was a problem… He acknowledged an ambulance in the crowd. He noticed people passed out and stopped the show on three occasions. I’m not saying he knew people were dead, but he knew there was a problem. An ambulance is not an ice cream truck.”

“I want to make myself clear: I am not just blaming Travis Scott,” Minn added. “There is plenty of blame to go around… It’s almost the six months anniversary, and no one has been held accountable.”

Scott returned to the stage during this year’s Coachella, making a brief guest appearance at an April 17 afterparty.

The rapper is scheduled to make an appearance on May 7 at the E11EVEN Miami nightclub, his first solo performance since Astroworld. He is also scheduled to take part in the Primavera Festival, a multi-country South American music festival, in the fall.

Concert Crush will open in 11 Texas cities, including Dallas, Austin, and Houston. 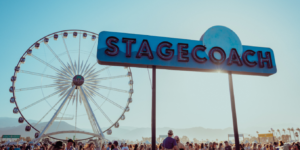 Stagecoach Bans Any Display of Confederate Flags at Upcoming Festival