Women and older soldiers will now be allowed to meet lower standards in order to pass the United States Army physical fitness test.

The announcement ended a three-year debate and dispels age- and gender-neutral testing.

The Army Combat Fitness Test that was adopted in 1980 evaluated pushups, situps, and a run. In 2019, the test was changed to include six events: a deadlift, power throw, pushups, plank, run and a combination sprint/drag/carry.

In May of 2021, the Army reported that data indicated nearly half of the female soldiers could not pass the harder ACFT. If it had become official, as originally scheduled in 2022, they could be removed from service.

In addition to female soldiers, the Army’s doctors and lawyers failed at higher rates.

“Service officials, including Sergeant Major of the Army Michael Grinston, testified before a House Appropriations Committee subpanel Monday that scores may end up being separated by gender to identify the 1st, 10th, 25th and 50th percentile of soldiers,” per Military.com.

Captain Kristen Griest, of the branch’s first female infantry officers who graduated Ranger School in 2015, came out publicly against a possible lower standard for women. Greist told The Washington Post a change could “undermine their credibility” and place missions and soldiers “at risk.”

“I’m here saying, ‘Women can do more than we think.’ I have learned this,” she said in an interview. “Your gender is not as much of a limitation as you think it is.”

Critics of Greist accused her of “internalized misogyny.”

Following a Congressionally ordered independent review of the fitness test, the Army officially move to adopted different standards depending on a soldier’s age or gender.

“The decision comes after a study by the RAND research organization confirmed that men were passing the new six-event fitness test at a much higher rate than women and that older soldiers were also struggling with their scores in the expanded, more difficult test developed in 2019,” reports AP News.

The RAND study analyzed 460,000 soldiers’ test results. In its conclusion, the analysis said that there was neither correlation between combat job performance and ACFT scores nor a connection between high scores and reduced injuries.

Other branches of the military use tiered requirements to evaluate an individual’s results on their branch’s fitness test based on age and gender.

The Army’s active-duty service members will begin taking the test in April but their results will not count until the test goes into effect in October. Members of the National Guard and Army Reserve can take the test until April of 2023, at which point their results will be recorded. Guard and Reserve members must take the fitness test once a year, whereas active duty members are evaluated twice a year.

When results are officially recorded in the fall, a soldier that fails twice will be discharged. 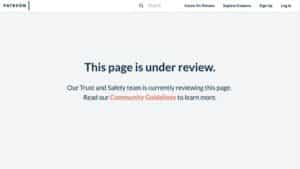 Patreon Bans Users for Content on Other Platforms Without Warning