Shipping containers stacked two-high along the gaps in the border wall will remain in place after Arizona declined to comply with the federal government’s demand that they are removed.

In a letter to the US Bureau of Reclamation on Oct. 18, the Arizona Department of Emergency and Military Affairs said the containers will remain in their current locations until the federal government pregnantly closes the openings in the border wall near Yuma.

“Arizonans cannot — and will not — wait for federal bureaucrats to do their job and secure the border,” Arizona Governor Doug Ducey tweeted on Oct. 19. “We’re taking action now.”

Since August, Ducey’s government has placed 120 containers in the opening to prevent illegal border crossings. The governor said at the time that the “Biden administration’s lack of urgency on border security is a dereliction of duty” and that Arizona had tried to work with the federal government for two years with no success.

“Our border communities are being used as the entryway to the United States, overwhelming law enforcement, hospitals, nonprofits and residents,” Ducey said. “It’s our responsibility to protect our citizens and law enforcement from this unprecedented crisis.

Yuma Mayor Doug Nicholls expressed his gratitude to Ducey for “ingraining himself in this issue and finding solutions.”

“Yuma has experienced the worst of the border crisis,” he said in August.

The federal government had said the containers were placed on tribal land without authorization and constituted trespassing. The Bureau of Reclamation has also said it has awarded a contract to close at least two gaps in the wall but that the containers must be removed so the project can move forward.

Adding to the skirmish, the Center for Biological Diversity filed a notice of intent to sue Arizona because the nonprofit believes the shipping containers obstruct the migration routes of jaguars and ocelots.

“Your placement of shipping containers to ‘close the gaps’ in the border wall is nothing more than a contemptuous, failing publicity stunt. Media coverage of the failure of your publicity stunt has been extensive,” the Center wrote in its letter.

The letter is addressed to Ducey, as well as the Department of Emergency and Military Affairs Emergency Management Director Allen Clark and Arizona’s Department of Homeland Security Director Tim Roemer. 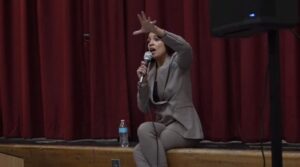