With six weeks to go until the Arizona gubernatorial election, Democrat Katie Hobbs and Republican Kari Lake are locked in an extremely close race.

Two polls released in the last two days show the two women each winning one by one point.

“A Marist poll of registered Arizona voters released on Wednesday shows Lake, a former TV journalist, with 46 percent support, a one-point edge over her Democratic opponent, who is also Arizona’s secretary of state,” The Hill reported on Wednesday. “But a Suffolk University-Arizona Republic poll released on Tuesday showed the two candidates swapped, with Hobbs holding a one-point lead with 46 percent support.”

“Ticket-splitting between Democrat Kelly for Senate and Republican Lake for governor is mostly occurring in vote-rich Maricopa County,” said Lee M. Miringoff, Director of the Marist College Institute for Public Opinion. “The Democratic candidates for Senate and governor are both carrying Pima County while both Republican candidates lead in the rest of the state.”

The pollsters also found that inflation is the top issue among midterm voters, followed by “preserving democracy,” “abortion,” and “immigration.”

Hobbs has refused to debate Lake, but both candidates will be participating in a town hall hosted by the U.S. Hispanic Chamber of Commerce next week. It is expected to be the last time the two women appear at the same event before the election.

“The forum won’t be broadcast live, but Univision will show it at 5 p.m. the following Saturday (Oct. 8), four days before the start of early voting in Arizona. In-person attendance is limited to 750 USHCC conference attendees on a first-come, first-served basis, with conference badges required to enter,” local radio station KTAR reports.

The candidates have only appeared at the same event one other time during the campaign season, both speaking at the Arizona Chamber of Commerce and Industry town hall on Sept. 7 in Phoenix.

President Joe Biden’s job approval rating stands at 39 percent among Arizonans, Marist found. A 54 percent disapprove of the job that he has been doing. Only 18 percent “strongly approve” of his performance. 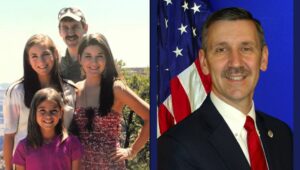