On Thursday, Rep. Alexandria Ocasio-Cortez (D-NY) commented on the crisis in Cuba, not wanting to miss an opportunity to be inaccurate and unpatriotic at the same time, she blamed the United States embargo on Cuba for the suffering of the Cuban people.

“We are seeing Cubans rise up and protest for their rights like never before,” Ocasio-Cortez said. “We stand in solidarity with them, and we condemn the anti-democratic actions led by President Diaz-Canel. The suppression of the media, speech and protest are all gross violations of civil rights.

“We also must name the U.S. contribution to Cuban suffering: our sixty-year-old embargo,” she continued. “Last month, once again, the U.N. voted overwhelmingly to call on the United States to lift its embargo on Cuba. The embargo is absurdly cruel and, like too many other U.S. policies targeting Latin Americans, the cruelty is the point. I outright reject the Biden administration’s defense of the embargo. It is never acceptable for us to use cruelty as a point of leverage against every day people.”

We stand in solidarity with the Cuban people and condemn the suppression of the media, speech and protest.

We also call for an end to the U.S. embargo and additional Trump-era restrictions that are profoundly contributing to the suffering of Cubans. pic.twitter.com/Fw6Quv5TAN

Sen. Marco Rubio (R-FL) noted on Twitter, “The U.S. is the largest provider of food to #Cuba & each year sends $275 million in medicine & $3 billion in remittances to relatives. The suffering in Cuba isn’t because of an embargo, it’s because socialism always leads to suffering.”

The Cuban protestors chanting “liberty” while flying an American flag suggests their problem is not with the country they are celebrating, but actually with the government forcefully suppressing their liberties.

They added, “Detention or the threat of detention is often used to prevent people from participating in peaceful marches or meetings to discuss politics. Detainees are often beaten, threatened, and held incommunicado for hours or days.” 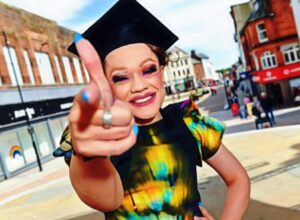 Drag Classes for Minors Sells Out in Scotland