‘This isn't just about us as truck drivers, or a certain group of people or anything. It's about Americans,’ said trucker Mike Landis

A group of truckers from California is preparing to take a stand against the federal government’s COVID-19 state of emergency by traveling to Washington, DC, in a movement they call the “Freedom Convoy USA 2022.”

The group has set plans to begin their journey from Barstow, California, on Feb. 23 and arrive in the capitol on Mar. 1.

The group, called The People’s Convoy, is organizing truckers who will travel to the nation’s capital and demand the Emergency Powers Act be lifted. According to Chris Marston, they hope to end the mandates in the United States. Marston is the chairman of the American Foundation for Civil Liberties, a non-profit that advocates for civil liberties.

“We demand the declaration of national emergency concerning the COVID-19 pandemic be lifted immediately and our cherished constitution reign supreme,” the group said on their website.

The group is inspired by the Canadian “Freedom Convoy” that has gained worldwide attention calling for Canadian Prime Minister Justin Trudeau to lift the nation’s cross-border vaccine mandates and more.

Maureen Steele, an organizer for The People’s Convoy, appeared on “War Room,” a political talk show and podcast hosted by former Trump advisor Steve Bannon. During her Feb. 16 appearance, she said that a map of the convoy route would be posted to the group’s site soon.

We are live!! We start our Convoy on February 25th! We have the dates, times, routes, pit stops and have everything ready for the March 1st arrival on the National Mall, DC! #freedomconvoyusa2022 #FreedomConvoy2022 pic.twitter.com/llrmdu1HOJ

The group said that they are taking measures to ensure the financial support of the convoy does not encounter the same troubles as the Canadian group. To ensure donations for the truckers won’t be frozen or routed to other causes, The People’s Convoy is accepting donations directly on its website.

“For me personally, it’s about our freedoms as Americans,” said trucker Mike Landis in a video published on the group’s website. “This isn’t just about us as truck drivers, or a certain group of people or anything. It’s about Americans. This is for the people.”

Editor’s Note: A previous version of this article mistakenly said the convoy begins on Feb. 25. 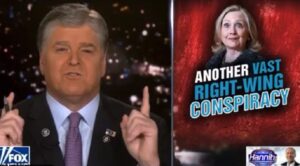 Hillary Clinton Implies She Might Sue Fox News For Defamation, Hannity Tells Her to 'Bring It On'