Vice President Kamala Harris said the United States shared an important alliance with the Republic of North Korea on Friday.

Harris mistakenly made the claim during first her first trip to the Demilitarized Zone (DMZ) separating North and South Korea this week. The Vice President met with South Korean President Yoon Suk-yeol on Thursday to discuss denuclearization of the Korean peninsula and condemned North Korean missile tests. Harris’ visit comes surrounding fears that North Korea is reportedly planning to conduct nuclear tests which would be the first of its kind conducted since 2017.

“The United States shares a very important relationship, which is an alliance with the Republic of North Korea,” said Harris shortly after her meeting with Suk-yeol. “It is an alliance that is strong and enduring.”

The White House’s Briefing Room appears to have removed her mention of “North” Korea in their Thursday transcript release.

KAMALA HARRIS: "The United States shares a very important relationship, which is an alliance with the Republic of North Korea." pic.twitter.com/H2dI5UYOlo

“I cannot state enough that the commitment of the United States to the defense of the Republic of Korea is iron-clad and that we will do everything in our power to ensure that it has meaning in every way that the words suggest,” said the Vice President, reaffirming the United States’ alliance with South Korea.

“Over the past seven decades, it has been clear: In the south, we see a thriving democracy, innovation, economic prosperity, and strength, a powerhouse — dare I say — on many of these issues, and a force for good in the world,” Harris continued. “In the north, we see a brutal dictatorship, rampant human rights violations, and an unlawful weapons program that threatens peace and stability.”

North Korea appears to have fired a total of five ballistic missiles since Harris began her tour of the region earlier this week. On Sunday, North Korea fired a missile from its east coast which South Korea’s military reported as single and short-ranged coming from the North’s Pyongyan province. The missile traveled roughly 373 miles at Mach 5 speed. Two more short-range ballistic missiles were fired from North Korea’s east coast on Wednesday, a day before Vice President Harris arrived in the South Korean capitol. On Thursday, about two hours after Harris departed from her visit to Seoul and the DMZ, two more missiles were fired from Pyongyang in the direction of the Vice President’s flight back to Washington, Reuters reported.

In 2019, former President Donald Trump made history visiting the DMZ and taking a reported 20 steps into North Korea. Trump thanked North Korean Supreme Leader Kim Jong Un, saying he was “proud to step over the line” and invited Un to visit the White House in what appeared to be an effort towards diplomacy between the nations, CNN reported. 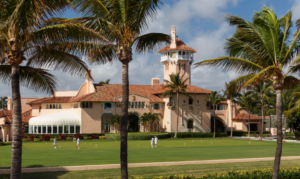