AmazonSmile, the company’s program that donates 0.5% from purchases to nonprofits, has allowed multiple local Black Lives Matter (BLM) chapters to remain in its approved charities list. However, BLMGNF is no longer found in the list of approved charities.

The move deprives BLM of a significant revenue source. It comes less than two years after Amazon donated $10 million to BLMGNF and 11 other social justice groups amid tensions of racial inequality in the United States.

“We offer the AmazonSmile program to make it easy for our customers to support their favorite charitable organizations, and we work to offer a broad spectrum of organizations, including those working to end racial injustice,” an Amazon spokesperson told reporters. “States have rules for nonprofits, and organizations participating in AmazonSmile need to meet those rules. Unfortunately, this organization fell out of compliance with the rules in several states, so we’ve had to temporarily suspend them from the program until they come into compliance.

“We hope that happens soon, and in the meantime, customers who have already selected them in AmazonSmile are able to continue supporting them, and we’ll hold any funds accrued until they’re back in compliance.”

The news comes after BLMGNF shut down its online fundraising earlier this month after multiple attorneys in California and Washington state demanded that the group submits outstanding financial records for 2020.

“We take these matters seriously and have taken immediate action,” a BLMGNF spokesperson told FOX Business. “We have immediately engaged compliance counsel to address any issues related to state fundraising compliance. In the interim, we have shut down online fundraising as we work quickly to ensure we are meeting all compliance requirements.”

However, the BLMGNF remains out of compliance in California, Washington, New Jersey, North Carolina, Connecticut, Colorado, Maryland, Maine, and Virginia.

Black Lives Matter said in an impact report at the end of 2020 it had raised roughly $90 million. The report stated the group spent $8.4 million in operating expenses, dispersed $21.7 million in grants to local chapters, and retained a $60 million balance.

Since its co-founder, Patrisse Cullors, resigned in May 2021, BLMGNF has not publicly named anyone in charge of the roughly $60 million balance.

On Wednesday, filings revealed that BLM retained the services of prominent Democratic lawyer Marc Elias. He is best known for funding the discredited Steele dossier while serving as Hillary Clinton’s 2016 campaign general counsel. 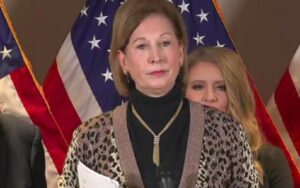