Amazon Offers $4,000 in Benefits to Employees to Travel for Abortion

Amazon joins other employers such as CitiGroup, Salesforce and Bumble to offer resources related to abortion care

According to a report by Reuters, the Amazon is offering to reimburse up to $4,000 in expenses for employees who must travel more than 100 miles for non-life-threatening medical procedures, including abortion.

The nation’s second-largest employer said the benefits are retroactive to Jan. 1 of this year.

The new benefit is open to U.S. employees and covered dependents enrolled in the company’s Premera or Aetna health plans. They also noted they offer up to $10,000 in reimbursement for treatments related to life-threatening medical conditions.

The decision appears to be a move to attract and retain employees by offering strategic benefits. The benefits are said to cover travel expenses and any related costs connected to the medical procedures.

In March, CitiGroup shared its decision to offer similar benefits in a letter to shareholders.

The letter stated, “In response to changes in reproductive healthcare laws in certain states in the U.S., beginning in 2022, we provide travel benefits to facilitate access to adequate resources.”

Many employers reacted to the restrictive abortion laws enacted by states such as Texas and Oklahoma this year. In Texas, seemingly the most restrictive, abortions are prohibited after six weeks of pregnancy or when a fetal heartbeat is detected. Doctors are barred from performing or inducing abortions under these conditions except for medical emergencies. The law does not allow exceptions for pregnancies that result from rape or incest.

Under Texas law, private citizens can sue anyone who helps a woman obtain abortion services and receive $10,000 in damages per instance.

After the law went into effect, multiple U.S. employers spoke out against the measure, including Lyft, Stitch Fix, Bumble, and more.

Salesforce offered to relocate employees at its Texas facilities to other states after the law went into effect there. According to a report by CNBC, Salesforce told employees, “If you have concerns about access to reproductive healthcare in your state, Salesforce will help relocate you and members of your immediate family.”

Bumble, based in Austin, Texas, said it was setting up a fund that will go to organizations that support reproductive rights.

“Bumble has created a relief fund supporting the reproductive rights of women and people across the gender spectrum who seek abortions in Texas,” the company said.

On Monday, a drafted opinion leaked from the U.S. Supreme Court revealed that the Court would likely upend the 1973 ruling on Roe vs. Wade, which guaranteed legal access to abortions nationwide.

The news has sparked intense debate among lawmakers and has incited protests nationwide. 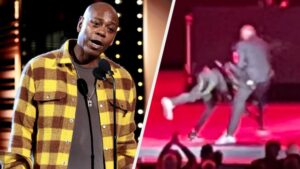